A new lease of life has begun for Aylings Country Garden Centre at Trotton, which closed last November.

The garden centre was bought from liquidators by a group of six Italian friends and business partners, who have reopened it as a traditional garden centre. 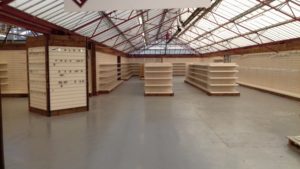 In mid-February, the team approached Red Cherry Shopfittings to refit it from scratch. With the centre to reopen in April, it was a fast turnaround, with input from the six stakeholders, but a final plan was put together and goods were ordered and delivered to site. All the till points and counters were manufactured on site and a team of fitters got the job completed on March 25, which gave the team at Aylings a full week to do the merchandising.

Aylings Garden Centre, on the A272 at Trotton, was run for many years by the Ayling family and Priscilla, who still lives in Midhurst, was invited to cut the ribbon when it reopened.

Spokesman Michele Gaudelli noted that they had all run successful businesses, including a garden nursery, craft businesses and farming. He added: “The good news is that we, as the new owners, have all the right intentions of getting the garden centre back to being a successful business.”