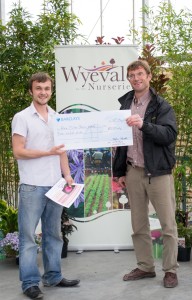 The 25-year-old, who is a Level 3 Horticulture student, scooped the accolade after wowing the judges with a written submission and an interview.

Steve Ashworth, Director at Wyevale Nurseries in Hereford, explained: “We would like to congratulate Alex on winning. The award was designed to encourage a student towards a career in nursery stock production by assisting with a practical placement at a nursery in the Netherlands.

“Alex won the award by displaying an inquisitive and adventurous spirit, well-grounded with current, active participation in practical horticulture.

“Annually the award is presented to a student at Pershore College in Worcestershire, which was Peter’s own seat of learning in the 1960’s. The award subsidises and organises for the successful applicant to do a period of work in the Netherlands during the college summer vacation, as Peter also did more than 40 years ago.”

Alex will be working for six weeks during the summer at Combinatie Mauritz, a tree producer in the Netherlands. It grows a broad selection of ornamental trees on 145 hectares of land and also grow fruit and shaped trees. Alex was also presented with £500 from Wyevale Nurseries to help pay for his travel costs.

Alex said: “I am over the moon to have won this award and can’t wait to get stuck in at Combinatie Mauritz. It’s such a great opportunity for me. I would like to say a huge ‘thank you’ to Wyevale Nurseries.”

The award was first presented to Ben Gregory, who was a second year horticulture degree student at Pershore, in 2012. He worked at Poppelaars Nurseries in the Netherlands in 2012. Ben is now the Product Development Coordinator at Wyevale Nurseries.

Wyevale Nurseries is one of the largest family-run wholesale nurseries in the UK. It was established in 1928 by Harry Williamson, a horticulturist and entrepreneur. It became the company it is today under the leadership of his son, Peter.