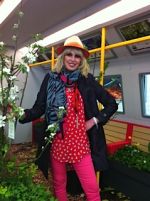 Peat-free plants and compost donated by Bettaland were used to make up the display, which used an unusual concept of a tube carriage showcasing trees and woodland planting.

The RHS Chelsea Flower Show takes place this week (21st to 25th May) and the award-winning exhibit featured a cross-section of a tube train, which attracted celebrities such as Joanna Lumley and Mary Berry. It housed a variety of native trees suitable for garden planting, grasses, and low-growing perennial plants which can be used for seating. The interactive exhibit explained the science that underpins the importance of trees and woods in an urban climate, particularly with regard to flood prevention, cooling and peoples’ health.

The Woodland Trust invited Bettaland, a green business that turns household and food processing waste from brown bins into compost, to contribute compost and plants such as Astilbe and Euphorbia, grown in its entirely peat-free nursery. Bettaland has been working for 10 years to reduce the amount of peat used as a growing medium, while also reducing the volume of green waste going to landfill.

Bettaland nursery manager Shaun Dring says: “In helping the Woodland Trust we’re not just providing peat-free plants and compost, but also helping to build public awareness. We want to highlight the damage done to peat bogs in the UK and how peat-free alternatives are just as good as traditional growing mediums.”

Commercial extraction of peat leads to the destruction of peatlands, which are important for biodiversity and flood risk management.

Peatlands also act as important stores of carbon – because plants do not decompose completely, the carbon held within them becomes locked into the peat. When peat is extracted and used in gardening, the stored carbon is released as CO2 – a greenhouse gas. Not only that, it takes 1,000 years to replace every metre of peat that is taken away.

Mr Dring says: “Using peat-free compost is better for the environment because it protects natural resources. If organic materials are sent to landfill sites, the rotting process generates methane – a powerful greenhouse gas that contributes to climate change. Recycling garden waste into a valuable soil improver is not only of benefit for the environment – it helps gardeners too. By being part of the Woodland Trust’s exhibit, we have taken another step in the right direction in educating the wider community.”

Austin Brady, head of conservation at the Woodland Trust, said: “It’s great that we can involve a green business like Bettaland in our RHS Chelsea exhibit. The interactive exhibit attempts to explain the science that underpins the importance of trees and woods and offers inspirational ideas for gardens. The public will be able to gain insight into what they as individuals can do to help now and in the future to build a resilient wooded landscape. By using trees in and out of context in a strongly visual way we hope to attract and inform visitors to be inspired by the potential of using trees within their gardens and the benefits this brings to the environment for flood prevention, urban cooling and habitat for wildlife.”