Brits are wasting an estimated £672m per year on their gardens according to new research by gardening supplier Gardena.

The excessive cost is a result of plants dying in the garden – a big problem for over two thirds (65%) of Brits. The research shows that this is due to a lack of basic gardening knowledge in the UK with a fifth simply forgetting to water their plants (19%), one in ten unable to tell a weed from a flower and 15% generally not knowing when to do what in their gardens.

A quarter of Brits’ gardening expertise is passed down from parents or other family, and a fifth (20%) research online before tackling jobs in the garden. But worryingly, more than one in ten (13%) rely on their instinct and 10% just make it up as they go along, which leads to inevitable disasters.

Not all gardening disasters however are the fault of inexperienced gardeners. Wildlife also causes Brits a problem with 64% confessing to their green-fingered efforts being ruined by snails, slugs, insects and birds. Lawns are another common problem-area, with a fifth of the UK admitting that their lawns are either awash with moss, or have patches where the grass has just died, and fences falling down are an issue for a fifth (18.4%) of UK adults too.

The kit we are using is also causing us gardening bother, as more than one in ten (15%) have suffered due to unreliable garden equipment.

Gardena’s Paul Simpson commented: “It’s a sad fact that budding gardeners are seeing so much wastage in their gardens – the vast majority of which is easily avoidable. Gardening is ultimately a science but the skill involved is learnt through practice – but with most hobbies there are tools that are there to make life easier. Setting up a simple garden irrigation system for example could solve the problem of almost 20% of those who struggle to keep up with their watering.

“And there are simple tips and tricks when it comes to lawn care that people just don’t know; like mowing the lawn in the evening, and leaving the grass cuttings out, to act as a shield against the sun. We are convinced that if people knew how to use their gardening tools more efficiently, they could see greater rewards from their gardens.” 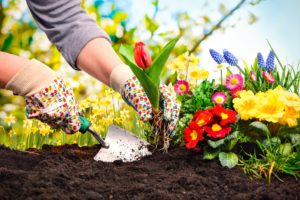 The research also shows that on average, Brits spend just 36 hours per year in the garden, which might also contribute to some of the problems avid gardeners face. The time we spend in the garden increases with our age; under 34s spend only 28.5 hours, compared with 37 hours for the 35-54 year olds and the over 55s spend 42 hours yearly in the garden.

However, despite all of these gardening mistakes, gardening is loved, and nearly half (42%) of us consider it as a hobby we genuinely enjoy and more than a third (39%) even use it as a form of exercise. A fifth of self-sufficient Brits enjoy growing their own supply of vegetables, and this is the area of gardening Brits love most too. Gardening even brings out the UK’s competitive side too, with more than one in ten (12%) admitting they are determined to have a better looking garden than friends and neighbours.

We still spend plenty in a quest to prettify our gardens too; with the national average spend at £339 per year, but Londoners are the biggest spenders in the UK, racking up £999 per year; more than any other region, followed by the North East (£614.20). Interestingly, these regions have the highest annual garden wastage per garden too – £64.57 in London and £42.15 in the North East. In contrast, the Welsh spend the least yearly on their garden at only £152.

Residents in the East Midlands love gardening more than any other region (49%) considering it as a hobby, whereas more than half of Northern Ireland (52%) view gardening as another household chore. Vain Londoners admit to trying to ‘keep up with their Jones’s’; with a quarter (24%) admitting their key gardening motivator is to outshine their friends or neighbour gardens. Meanwhile, those in the North West are the most likely to share social media photos of their back yards.