B&M has opened its 100th garden centre, in Salisbury, and has plans to open a further ten garden centres in 2016, the company has announced. 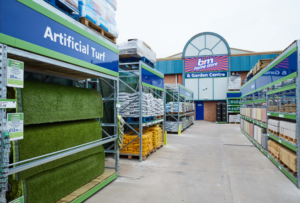 The discount retailer has strengthened its position in the gardening market with the milestone garden centre. B&M has more than 500 stores across the UK selling a variety of products, including food and drink, toys, homewares and a DIY range. Last year alone, B&M sold enough artificial turf to cover more than nine football pitches, enough fence panels to cross the channel five times and more than five million plants, the company says.

The retailer opened its first garden centre in 2011 as part of its Leek store on Barnfields Road and has rapidly increased its portfolio to 100 in just five years.

The new Salisbury store, located on the Southampton Road Retail Park, has created more than 80 jobs for local people.

Chief operating executive Simon Arora said: “We are delighted to reach this milestone at our garden centre division, which now has the critical mass to be an important player in the sector.”