Bradstone has supported an inspiring show garden which scooped Gold and Best in Show at this year’s BBC Gardeners’ World Live show, held at the NEC Birmingham from June 16 to 19.

‘The Health for Life Community Garden’ was designed by Owen Morgan of Mosaic Landscape Design. The project, sponsored by the Health for Life programme and funded by the Mondelēz International Foundation, celebrates community green spaces and portrayed to visitors the diverse and worthwhile ways these spaces can be used, such as for activities and growing food. 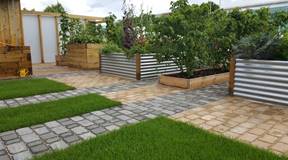 Owen selected 90sq m of Bradstone’s Woburn Rumbled paving in Graphite and Fossil Buff to feature in his design. With traditional rumbled and smooth rounded edges, Woburn Rumbled evokes a cobble style. Its weathered appearance and mottled effect was chosen to help create a sense of charm and character in Owen’s Community Garden, where the pavers have been used to form a matrix of paths throughout the design.

Owen is a multi-award winning international garden designer. A finalist in the RHS Young Garden Designer of the Year Award in 2011, he has since gone on to achieve eight RHS medals, including two Golds and two Best in Show. Owen is a regular at BBC Gardeners’ World Live, winning Bronze for his ‘Family Garden’ in 2015, and Silver Gilt for his ‘Silent Spring – Nature Garden’ in 2014.

Bradstone commercial director Toby Stuart-Jervis commented: “We are delighted to have been able to support Owen’s garden; mostly because his project has a significant social purpose, but also because we have enjoyed seeing him use our Woburn Rumbled driveway block paving in an innovative way.

“By seeing features such as his outdoor kitchen and raised vegetable beds, we hope that the gardeners and homeowners visiting the show were able to take away some great inspiration on how they can get maximum use of their own outdoor space.”