October was a challenging month for UK retailers, according to the latest figures released by the British Retail Consortium (BRC) and KPMG.

Over the three months to October 2017, In-store sales of Non-Food items declined 2.2% on a Total basis and 2.9% on a Like-for-like basis. On a 12-month basis, the total decline was 2.1%, the deepest since the BRC’s records began.

BRC chief executive Helen Dickinson OBE commented: “It was a meagre month in October for retail sales as shopping activity slumped. With total growth at its lowest since May and below the 12-month average, retailers will have cause for concern as they prepare for the crucial run up to Christmas.

“The decline was driven by the worst performance of non-food sales since our record began in January 2011, as consumers appear to have opted for outdoor experiences and excursions during half term, over visits to the shops.”

She added: “Real consumer spending power has been on a downward trend in the last year as the acceleration in inflation has caused shoppers to become ever more cautious in considering what purchases they can afford. Many now face higher borrowing costs, given the rise in interest rates, which will only serve to heap further pressure onto household finances.

“Considering the intrinsic link between consumer spending and economic growth, the Chancellor should reflect on this disappointing state of play and deliver a Budget that allays the risks of a further slowdown in consumer spending, by keeping down the cost of living. In other words, a shoppers Budget.” 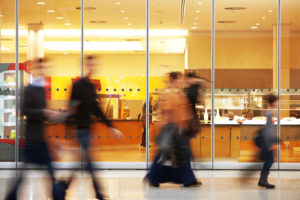 KPMG head of retail Paul Martin said: “October marked yet another reversal of fortunes for retailers, reinforcing just how volatile consumer spend has been. Despite the positive picture last month, these latest figures will be a real disappointment and not the start to the golden quarter retailers had hoped for.

“Overall growth online was lacklustre at best, although health and beauty products continued to stand out as a strong performer. The burning questions for retailers will be whether shoppers are holding off their purchases until Black Friday, and whether retailers can recover from this month’s poor performance to end the year on a high.

“With the Bank of England’s interest rate decision seeing the first hike in ten years, we are likely to see a continuation of the sector’s slow-down, with consumers having less disposable income to spend. The Autumn Budget also nears closer and retailers will most likely be hoping for some form of relief, particularly after the challenges business rates created.”

Among those to comment on the figures was Salmon global head of consultancy and innovation Hugh Fletcher. “The new figures released today don’t make for good reading for retailers across the country,” he said. “At a time when wallets are being squeezed and business uncertainty is rife, retailers need to ensure they are offering consumers enticing deals and competitive prices with a speedy service to boot. While the warm October weather has contributed to sluggish traditional winter sales, companies need to ensure they retain a strong multichannel approach to sustain growth and increase sales; combining a strong ‘offline’ offering in the high street with an equally robust online approach should ease the pressure on many retailers.

“The rest of the year should hopefully bear more fruit, as we begin to approach the Black Friday ‘peak’ weeks. A strong focus on digital and innovation will be vital for consumers wanting a quick and convenient service – the figures are suggesting, after all, a shift from buying items they want to rather buying items they need. As consumers increasingly flock online to purchase goods, retailers should be looking to start Black Friday sales sooner rather than later to boost the slump in non-food sales, perhaps by even creating their own ‘peak days’ to stave off the competition from Black Friday stalwarts such as Amazon. The next month or so will be a game-changer for many in the retail business.”