Garden buildings advice and reviews website WhatShed.co.uk has conducted research in a bid to understand what the effects of Brexit are likely to be for the UK consumer garden buildings market, as well as what effects have already been seen.

To find out about market effects, WhatShed.co.uk surveyed two of the UK’s largest garden building manufacturers, Mercia Garden Products and Shire Garden Buildings. Both manufacturers supply a significant percentage of the total volume of garden buildings sold in the UK both online and via ‘Blue Chip’ high street retailers, WhatShed says.

Among the findings were rising import costs, which may be passed on to consumers in the future. Currency swings following the decision to leave the EU (21% drop in value of Sterling) have seen large cost increases in imported raw materials, WhatShed reveals. Imported timber/materials typically make up 66% of the final costs the consumer pays, and currency fluctuations have caused a typical 14% cost increase to manufacturers.

WhatShed adds that to date the manufacturers have absorbed the costs, due to many ‘Blue Chip’ retailers having had fixed price agreements in place, thus insulating consumers from any price rises.

However, from April 2017, those costs will likely be passed on. Mercia Garden Product managing director Terry Waldron commented: “As the dust has settled, and reality set in, this has now led to ‘Blue Chip’ customers accepting cost price increases, albeit very reluctantly.” 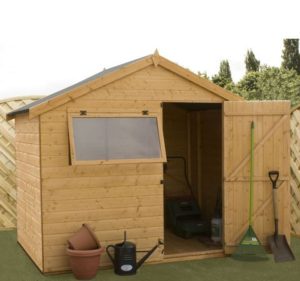 Consumers are likely to see price rises in 2017 ranging from an 8% to 10% increase, WhatShed adds, while manufacturers are actively working hard to reduce capital projects in a bid to reduce costs and combat the remaining effects of the increases. This means potential job freezes or cuts are likely, WhatShed warns.

Consumers may also increasingly seek out advice online. Terry Waldron added: “The consumer will undoubtedly turn to the internet to search for the best prices and competition will intensify.”

WhatShed adds that on a positive note, overall, sales of buildings have risen over the last two year period and this trend appears to be continuing for 2017. The focus is once again on staying at home and improving all aspects of it. More people are expected to have ‘staycations’ this year due to the weak pound, so they are more likely to make the most of their gardens and garden buildings, WhatShed notes. A growing trend for bespoke buildings continues, and this again still appears to be strong in 2017, aiding UK manufacturers due to higher margins.

The full release from WhatShed can be found here.