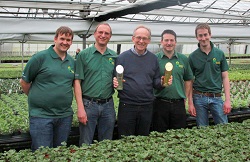 A West Sussex nursery that has recently won two prestigious awards including being declared Ornamental Grower of The Year says it owes its success in part to nurturing industry talent.

Barnsfold Nurseries in Rudgwick, West Sussex received the accolade at the UK Growers Awards recently and also collected an award for being the best grower of protected ornamental plants.

Partner in the business, Nigel Wait explained: “My mother, Isobel, and father, Bill, started the nursery 50 years ago. One of the things my father was very keen to do was to reward staff members who came into the business at a young age, who were prepared to work hard, learn and develop the business further.

“My partners in the business, John Turner and Peter Titmuss, were two such employees, who are not related to my family, but have shown dedication over many years. They are now encouraging team members Jonathan Brown and Oliver Turner to also take the business forward to the next level.

“British horticulture needs to encourage the youth of today and take it forward to the future, something Barnsfold has been doing for 50 years.”

But it’s not just the team that Barnsfold Nurseries employs that is dynamic and youthful. The judges were also impressed by how the nursery had adapted to target a younger market.

Nigel added: “Barnsfold Nurseries’ plants and containers are appealing more to a younger clientele through their colour themed pots and planters, making a new fun way of gardening. Our innovative animal planters attract younger people into gardening, which has helped garden centres expand their sales across the age ranges.”

The judges were so impressed that the nursery had adapted to target a different market, that the National Farmers’ Union (NFU), which was involved in the awards, has nominated Barnsfold to contest the world finals in China in September this year.

Another reason Nigel attributes to Barnsfold Nurseries’ success was his father’s ability to read the future.

“My father refused to supply the demanding supermarkets in the Eighties. Other bedding plant growers throughout the country thought it was easy money dealing with just one big customer and not with the up-and-coming garden centres that they felt made distribution, among other things, a problem. It’s a shame they didn’t have the foresight my father had. The rest is history, like a lot of the nurseries.

“We are still dealing with the same customers, as well as new customers, that we dealt with many years ago and I would like to think that we have all grown and thrived together over the years by changing production and marketing techniques to meet modern day consumer lifestyles.

“We have always been supporters and members over the years of the British Protected Ornamentals Association (BPOA), formally the British Bedding and Pot Plant Association, in fact my Father was a chairman of the organisation many years ago, so to have been given this award and to be recognised in this way is a wonderful thing.

“We’re absolutely delighted with these two awards, sponsored by Quinten Edwards and Modiform. They are a true testament to all the hard work that the team puts in.”