Bunnings UK and Ireland managing director PJ Davis chose the November 3 BHETA Networking Forum at the Ricoh Arena as its platform to outline plans for the rollout of the Bunnings brand in the UK and Ireland.

In a presentation including announcements on timings, strategy and projected spend, Mr Davis revealed that the first Bunnings Warehouse pilot store would be opening in mid-February in St Albans. 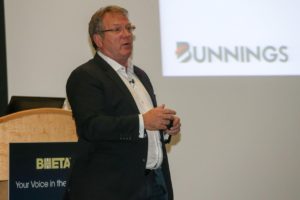 The event, the latest in BHETA’s programme of networking forums to be headlined by a key retail figure, was attended by 350 DIY, garden and housewares industry leaders. BHETA members were treated to a comprehensive preview of Bunnings’ plans including details of at least three more pilot stores by the end of June 2017 as the company phases out the Homebase brand, and a further four to six by the end of next year.

Bunnings plans to spend £500m transforming the Homebase business and adding to the estate with new stores. Mr Davis also confirmed that its core proposition would be refocused on DIY, tools and consumables and an enhanced garden offer.

The Bunnings presentation was just one of four informative and thought provoking sessions. CBI deputy director general Josh Hardie provided a fascinating insight into the evolving relationship between business and government in the weeks and months following the Brexit vote. Another highlight of the day was Victoria Neuhofer from FN Neuhofer HOLZ of Austria reprising her very exciting closing speech from this year’s Global DIY Summit in Stockholm all about targeting Generation Y in ways that could engage them in DIY, home and garden.

BHETA DIY executive director Paul Grinsell said: “This was a really compelling event and it’s great that BHETA can attract such excellent speakers, so keen to share their plans and insights with the BHETA membership.”