The Sheffield-based manufacturer supplied a range of tools and equipment for use during the construction of the garden, as well as props and accessories that were used to ‘dress’ the finished garden.

The RHS Young Designer competition, now in its eighth year, was created to give young designers the opportunity to showcase their work at a high profile horticultural event and kick-start their careers. Previous Tatton alumni have gone on to design gardens at the world-famous RHS Chelsea Flower Show, including Hugo Bugg (2010 winner) and Sam Ovens (2014 winner). 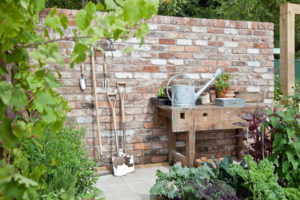 This year three finalists were selected to design a show garden based on the theme of Health, Happiness and Horticulture. The garden that Lilly created using Burgon & Ball tools was entitled ‘A Space to Ruminate’, an area designed to draw visitors into the garden through the use of a stepped wooden pergola and reclaimed scaffolding path.

The garden, though compact and typical of the space which many people have available, consisted of several distinct areas. The main garden led onto a kitchen garden containing seasonal produce, and a third area that trailed with hops, housing a day bed for relaxation and privacy.

Lilly commented: “I’m so grateful for the support from Burgon & Ball: it felt like Christmas when the tools arrived! It made the build of my show garden a lot easier, as the team had exactly the right tools for the job at every stage. Trying to get established in a career in garden design is far from straightforward, and it’s great that a company like Burgon & Ball is helping young people like myself.”

Lilly’s garden was awarded a Silver Gilt medal, and the whole experience will doubtless prove a hugely valuable one, as she goes on to develop her career as a garden designer. Although the garden may have missed out on first place in the competition, gardening broadcaster and personality Monty Don declared on the BBC’s show coverage that it was his ‘favourite garden in the whole show’, which is certainly a major achievement for a first show garden.