The Mayor of Sherborne, Councillor David Birley, officially opened Castle Gardens’ 30th anniversary celebrations on Saturday April 1 with a cake cutting ceremony, which was attended by customers old and new, local businesses and friends of the garden centre. 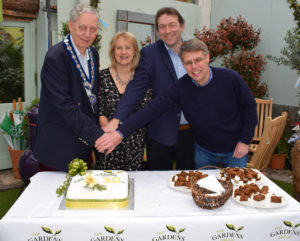 Following a toast, where Councillor David Birley congratulated the Sherborne-based garden centre, which is part of The Gardens Group, on reaching such a milestone, as well as acknowledging its continued commitment and work with charity initiatives and the local community, the cake was cut to declare the 14 days of celebrations open.

The Gardens Group managing director Mike Burks commented: “It was such an honour to have so many familiar faces joining us to raise a glass for our 30th anniversary. When Louise and I arrived in 1987, it was a bitterly cold winter and we had our work cut out to clear the site, uncovering all sorts from fallen cold frames, greenhouse bases and even whole buildings covered in ivy. When the doors opened for the first time on April 1 1987 we had just one till, and now 30 years on, we have a wonderful team of over 60 staff at Castle Gardens alone. We’re extremely proud of everything we have achieved and are looking forward to seeing what the next 30 years has in store.”

With plans for tree planting at schools and other sites across the community, charity fundraising initiatives and special offers at Castle Gardens over the next fortnight, the celebrations have only just begun. On Friday April 7, Sharandys Birds of Prey will return to Castle Gardens with a selection of birds including an Eagle Owl, Barn Owl, Tawny Owl, Malaysian Wood Owl and American Kestrel, allowing visitors to get up close to the birds.