UK garden centre group Wyevale Garden Centres is launching a new campaign, supported by original research conducted by a children and young adult research specialist, Childwise, to encourage Britain’s gardeners to plant more trees across the country in a bid to improve the health and wellbeing of children growing up across a technology-dependent UK. 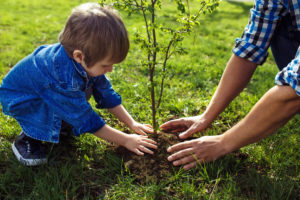 Wyevale Garden Centres partnered with Childwise to produce fresh statistics which emphasised the concerning issue that while schools are educating children on the practical benefits of trees, the emotive values of engaging with trees by playing outdoors are being dominated by the rise of modern day technology such as iPads and video games.

Childwise also gathered figures which support the lack of familiarity children have with some of the most common trees in Britain:

Wyevale Garden Centres plant buyer David Mitchell commented: “Trees have long been the plant of choice for gardeners seeking to create a shady spot, a burst of colour or a bite to eat. Once upon a time, trees were also a popular source of entertainment from swings to tree houses. Planting more trees this Autumn will not only set your garden up for Spring, but also create spaces to encourage children to put down the tablet and enjoy the outdoors.”

Childwise research director Simon Leggett added: “The questions in this survey were quite unusual in the sense that they were very specific to trees and the difference these make to a child’s upbringing. They brought to light some very interesting data which shows the hold technology is increasingly having on younger generations and just how out of touch they are with the traditional enjoyment trees are known for.”