Squire’s Garden Centres is celebrating its 80th anniversary this year.

As part of the commemorations of the occasion, chairman Colin Squire (who has worked for the family company for 61 years and is 80 this year) went back to his old school, Bishop Perrin Primary School in Twickenham. He gave the children a talk about what it was like going to school during the war, and when the school was bombed. He also talked about rationing, and why growing your own food was so important.

The children then helped Colin Squire to plant a beautiful jasmine archway in Squire’s pots at the entrance to their school garden to celebrate Squire’s 80th anniversary. The jasmine will give a wonderful fragrance to the garden and encourage wildlife. 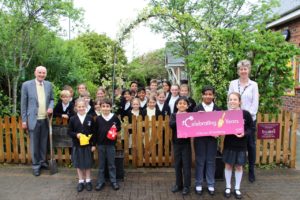 Squire’s Garden Centres chairman Colin Squire commented: “It was absolutely lovely to be back at my old school, and to talk to the children about my time here during the war, and about gardening. The children were very enthusiastic about gardening, and it’s fantastic that they have their own school garden and even a gardening club.

“I am so thrilled that Bishop Perrin Primary School children can enjoy this beautiful jasmine archway in their school garden to celebrate Squire’s 80th anniversary. My father, D.J. Squire started the company in 1936, and my daughter Sarah is deputy chairman, so it’s still very much a family business with its roots in Twickenham.”

Colin Squire also launched a Scarecrow Competition for the children at Bishop Perrin Primary School to take part in. The classes have been asked to design their own scarecrow with the theme ‘celebrate’ – it could be to do with Squire’s celebrating its 80th anniversary, or celebrating the Queen’s 90th birthday, or any other celebration that captures their imagination.

Each class taking part will name their scarecrow, then they will be displayed at Squire’s Garden Centre in Twickenham from Friday May 20, where parents, staff and customers can vote for their favourite scarecrow.

Voting can be done at Squire’s in Twickenham, or via Squire’s Facebook page, with the winning class to receive a trip to Hampton Court Palace for the day.