This October, over 200 dealers and media attended three ‘Discovery Days’ held by Barrus across the country – at Ripley Castle, Winkworth Farm in Malmesbury and A Day in the Country in Aynho.

Sales and technical manager Phil Noble and his team unveiled a host of new products for the 2019 season from the wide range of Barrus brands including Cub Cadet, Lawnflite, WOLF-Garten, Wilkinson Sword, Town & Country and CEuk. 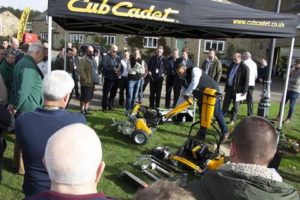 During the morning, dealers were walked through the new products and advised on the features and benefits. The afternoon was then spent with the opportunity to test the machines including taking Cub Cadet’s PRO Zero-Turns around a driving course. Other new products from Cub Cadet included the entry level robotic model XR1 500 and the new top of the range lawnmower the XM3 ER53, which will be making its public debut at Saltex on October 31.

Lawnflite PRO was represented by its first hydrostatic roller mower, the 553HRSP-HST, which is 50% faster than the high speed 553HRS-PROHS. This machine will also make its debut at Saltex along with the new range of Duracut and Procut lawnmowers from Rover.

As the exclusive distributor of GTM products, Barrus had an extensive display of products on show and for dealers to use. The feedback was excellent for chippers as it was for the new ancillary products; the Rattlewedge, a unique tree felling device and the Elephants Trunk 2, having both had successful launches at the APF show in September.

Finally, dealers were interested to learn more about the professional range of Infinicut mowers from Cub Cadet. These precision mowers bring enhanced mowing performance to sports and fine turf requirements as used at Wimbledon Tennis Club and fast becoming the machine of choice for leading football clubs, including Real Madrid and Chelsea.

Phil Noble commented: “We have been delighted with how our Discovery Days have been supported by our dealers. The array of new products we have launched across all our brands and market sectors have been very well received and we look forward to rolling these out to our dealer network in 2019.”