Fern sales up 44% year on year

Fern sales have seen a surge at Wyevale Nurseries in Hereford, with the company revealing it has seen a 44% year on year increase (March 2016 until the end of March 2017).

The company says it feels this is due to the plants being on trend in the retail, amenity landscape and domestic landscape markets. 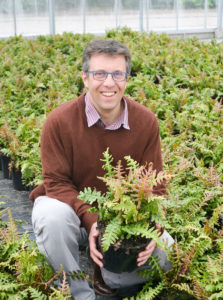 Wyevale Nurseries sales and marketing director Adam Dunnett said: “It’s fantastic news. There are a few factors for the increase in sales, such as the interiors colour trend for 2017 being that of ‘Greenery’ and botanical and ferns feature in prints and on fabrics. Our increase in fern sales would support this new trend.

“Ferns seem to be very popular not just because of their colour but also for their texture and the fact that they can be a standalone plant in a pot for any patio.”

Adam added: “We have also revamped our fern range and we now believe we grow the best of the best in terms of variety. Our top five varieties at the moment are Polystichum polyblepharum, Dryopteris erythrosora, Asplenium scolopendrium, Cyrtomium fortune and Polystichum setiferum Herrenhausen.

“We’re also growing a new variety, which is called Blechnum brasiliense ‘Volcano’. It’s a stunning architectural plant and in spring the young fronds erupt in bright coppery pinkish red. As they mature they turn to a rich dark green. It’s a strong growing plant with a shuttlecock shape. The ‘Volcano’ is also an ideal stand along feature plant.”