The opening day of PATS Telford has been hailed as a huge success by both exhibitors and visitors, as an array of new products were unveiled at the Telford International Centre.

Many of the exhibitors were particularly pleased with the quality of enquiries and orders generated on Sunday from the many visitors who flocked into the centre. 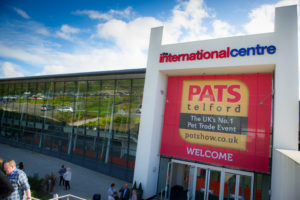 Pets Choice used PATS Telford to launch its new Meatiful range of pet food, and marketing manager Julie Butcher said: “We’ve had a very successful first day. The orders on our new range have exceeded all our expectations. We’ve also had a lot of international interest from buyers from Greece, Spain and France.”

Huxley Hound, which recently appeared on the BBC2 Dragons’ Den, received lots of pre-orders of its newly packaged dog treats to be launched on October 1. Zena Deane said: “The TV exposure created a buzz around our products so it has been fantastic to exhibit at such an important show like PATS so soon after the Dragons’ Den episode was aired.”

New exhibitors were impressed with the reaction they got on the first day of PATS. Karen Scott, of Purely Fish, said: “The positive feedback we’ve received from independent pet retailers and international buyers to our products has been amazing.”

And Lorna Edwards, of Petbloon, commented: “I’m amazed at the reaction to our ‘big fun balloon’ toy. So far this show has been beyond my wildest expectations.”

PATS newcomers Pawbo Inc were pleased their range of remote and interactive toys and devices, created lots of excitement, with Hans Liu saying: “I’m really pleased we decided to exhibit at the show. It has been really impressive so far.”

The first day of the show also got the thumbs-up from visiting retailers. Hannah Edmondson, of Trusty Pet Supplies, Derby, said: “We’ve been amazed with the number of new companies exhibiting. It was great to see so many new products.”

Victoria Clay, of Pups & Pets, Chester, said: “This has certainly been the best PATS exhibition we’ve attended. There have been so many new products to choose from.”

Steve Bracegirdle, of Raw Feeds Ltd, near Chorley, said: “This is my first PATS show and I’ve been impressed with the variety of products and services being exhibited. I didn’t know there were so many pet accessories out there.”