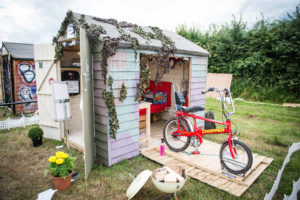 CarFest North, which fundraises for BBC Children in Need, included highlights such as the Red Bull F1 racing team, vintage car displays, and performances from music acts such as Travis, The Corrs and Seal.

Forest supplied 15 of its 6’x4’ Apex overlap sheds for teams of families to decorate in their own styles, bringing to life ideas that had been submitted before the event and shortlisted by the festival’s organisers. The finalists were announced by Strictly Come Dancing stars Natalie Lowe and Joanna Clifton – with the winner, Oscar’s Survival Shack (pictured) – being announced on stage by Chris Evans himself.

Forest sales and marketing director John Gomersall said: “CarFest has been great for us not only in terms of being able to showcase our sheds to hundreds of shed fanatics and their families, but also in supporting a festival that is raising awareness and funds for Children in Need.”