From carrier bags to cash: Squire’s donates £1,829 to charity Greenfingers

Squire’s Garden Centres has given £1,829.08 to the charity Greenfingers from the carrier bag charge.

The 5p carrier bag charge came into effect on October 5 2015 in England, and since then Squire’s has dedicated the proceeds from this charge to the charity Greenfingers, who create inspiring and magical gardens for children in hospices around the UK. 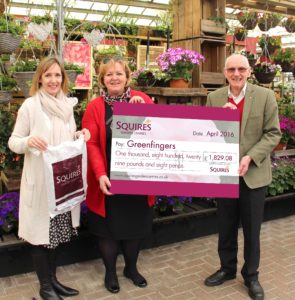 Squire’s deputy chairman Sarah Squire commented: “When the government first introduced the carrier bag charge we chose the charity Greenfingers to benefit from this, as they create amazing gardens for children and their families to enjoy in hospices around the country, at a time when these families are facing huge challenges. We are delighted to support them by passing on the proceeds from this charge.”

Greenfingers head of fundraising Linda Petrons added: “We would like to thank Squire’s Garden Centres for choosing to support Greenfingers through the carrier bag charge. This wonderful donation will go towards our A Million Moments Appeal which aims to raise £1m to enable us to bring the gift of a garden to at least 5,000 more children and their families who spend time in hospices right across the UK.”

In 2014 over 7.6 billion single-use plastic bags were given to customers by major supermarkets alone in England. That’s around 140 bags per person, the equivalent of about 61,000 tonnes in total. They take longer than other bags to degrade in the environment, can damage wildlife, and are extremely visible when littered in our towns, parks and the countryside.

The good news is that since the charge was introduced last October, bag usage has declined by around 80%, and numerous charities and good causes will benefit because of it.