Popular gardening programme Love Your Garden is now back on screens as a new, re-edited half-hour programme, being aired during national prime time TV at 8pm on a Friday evening. The show will follow and precede episodes of the soap opera Coronation Street on ITV and will also be repeated on a Sunday morning at 9:30am before the political programme Peston on Sunday. 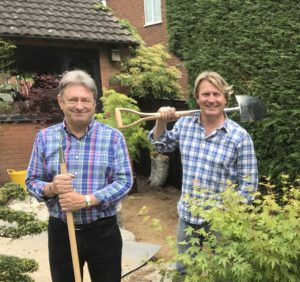 Last year Love Your Garden had viewing figures that peaked at over 4 million, making it the top gardening show in UK television. The show stars TV gardeners Alan Titchmarsh, David Domoney, Francis Tophill and Katie Rushford as they help to transform the gardens and the lives of deserving families from across the UK and is now in its eighth season.

The one hour show has now been commissioned for a further two seasons, with Alan, David and the team already set to film eight new episodes this coming summer as well as a Love Your Garden special.

In addition to this, Love Your Garden has also recently been added to the on-demand streaming service Netflix, with a whole season of the original hour-long episodes, allowing the inspirational gardening programme to reach a wider audience than ever before.

David Domoney said: “It’s a great programme to work on; we meet such inspirational deserving people and the positive impact a garden can have on people’s lives never ceases to amaze me. I am so pleased the show has found a place in so many viewers’ hearts, and even more so with it now on Netflix, portraying the hobby of gardening to a whole new audience.”