Thanks to sales of Gardman charity poppy bird feeders and bird seed in garden centres across the UK, £218,359 has been raised for The Royal British Legion and Poppyscotland, with funds going towards supporting individuals and families from across the Armed Forces community.

This total amount exceeds the projected target of £200,000 and reflects the soaring popularity of the poppy feeders amongst the British public. 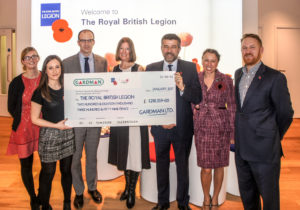 Gardman pledged to donate 50p for every sale of its cast-iron Poppy Bird Feeder and up to £1.50 for sales of its Wild Bird Seed Blend to the Armed Forces charities.

Gardman chief executive Peter Utting said: “We are immensely proud to have raised such a significant amount of money for The Royal British Legion, whilst at the same time creating a consumer proposition that has been in phenomenal demand. The feeder alone has generated £2.5 million of incremental sales within the wild bird category. I would also like to thank the Gardman team and all our customers for supporting such a worthy cause. Our plan is to go bigger and better for 2017!”

The Royal British Legion fundraising director Claire Rowcliffe added: “We are extremely grateful to Gardman for the monies raised through the sale of their beautiful Poppy Bird Feeder and Wild Bird Seed Blend, which will support the Armed Forces community and their families. Gardman have managed to raise an incredible total in just the first year of our corporate partnership, exceeding expectations.”

Hundreds of garden centres across the UK joined forces with Gardman to support the fundraising effort with eye-catching retail displays of the Poppy Bird Feeder and engaging social media campaigns helping sales soar and products to sell out within weeks.

Swadlincote-based Garden King garden centre marketing manager Benjamin Smith commented: “The Poppy Appeal from The Royal British Legion is so close to everyone’s hearts both locally and nationally. Our striking Gardman Poppy Bird Feeder display drove footfall to the centre with hundreds of customers picking up a Gardman Poppy Feeder for their own gardens.”

As well as exceeding the donations target for The Royal British Legion and Poppyscotland through the sale of Poppy Bird Feeders and bird feed, Gardman also provided six care homes and a break centre that support veterans and their families across the country with all the essentials for encouraging wild birds to visit and feed. Gardman donated more than £2,500 worth of bird care kits – which included a mix of Poppy Bird Feeders, bird baths and feeding tables – to The Royal British Legion services.