Geoff gets growing his tash again for Hereford hospice

A member of staff at a UK nursery is this month growing a moustache in aid of a hospice in Hereford. 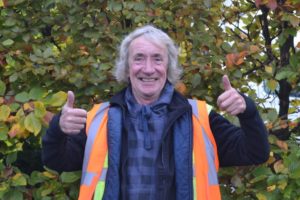 Geoff Godsall, who has worked at Wyevale Nurseries for 30 years and is currently a trading foreman, will be growing a moustache for the second year running to fundraise for St Michael’s Hospice.

Geoff, who is 64-years-old and lives in Hereford, said: “I chose to support St Michael’s Hospice again this year as it’s such a vital local charity. It offers a fantastic service to the community during particularly hard times. Both the hospice and Macmillan Nurses have helped my friends and family in the past. I just had to show my support again this year for such a worthy cause.

“I will be growing my moustache during November and I will be able to shave it off on December 1. Last year I managed to raise £260 for the hospice so I am hoping to match that figure this year.”

People can sponsor Geoff via www.justgiving.com/fundraising/geoff-godsall1.