Horticultural trade charity Perennial has named the Garden Industry Manufacturer’s Association (GIMA) are one of its ‘Charity Champions’ at its Party for Perennial, in response to GIMA raising over £6,000 from two separate fundraising events. 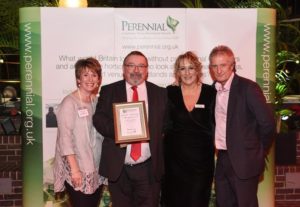 Perennial was initially chosen by GIMA past president Colin Wetherley-Mein to be one of the beneficiary charities for its Golf Day in June and the GIMA Awards in July 2016. The generous donations received from GIMA members at these two events were added to the total Perennial Hortiaid fundraising pot, which totalled more than £162,000 in 2016. This money will be used to provide support to horticulturists who need the charity’s help.

GIMA director Vicky Nuttall said: “We are delighted to have been awarded ‘charity champions’ by Perennial, an incredibly important charity that provides free and confidential advice, support and financial assistance to everyone that works in horticulture. I want to take this opportunity to thank GIMA members for their generosity during our fundraising efforts, as without them we would not be picking up this award.”