Deco-Pak and GIMA both fielded teams, raising over £1,200 for the charity which supports all those that work in the horticultural industry who fall on hard times. 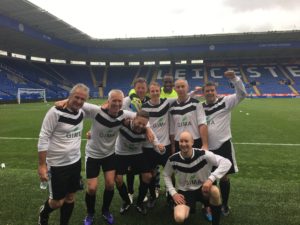 After three group matches, the tournament was then split into ‘Cup’ and ‘Plate’ knock out stages. Deco-Pak, who beat GIMA in the first group game, made it to the quarter-finals of the Cup tournament, but GIMA did even better and progressed to the final after beating event sponsors ICL. Sadly, they were then beaten by Gavin Jones United, who went on to win the tournament overall, in an extra final match against the winners of the ‘Plate’ final. After the tournament ended, players including Rob Giles and Robbie Cumming were encouraged to place further donations in order to attempt to ‘beat the goalie’, scoring between the posts of the full size goals of the King Power stadium.

Deco-Pak marketing manager and GIMA council member Craig Hall said: “Walking down the tunnel and onto the immaculate pitch as a player was an amazing experience, one that any football fan could appreciate. We did really well against the other teams – despite not having any training together beforehand – and I put that down to the leadership qualities of those on the team and excellent networking at previous GIMA events. Special thanks must go to Vicky, Kimberley and Fernanda, as well as the Deco-Pak team, who all cheered us on to the end as well as donating to help finance the team kits and raise much needed funds for Perennial.”

GIMA director Vicky Nuttall said: “From a spectator’s point of view, the stadium was a spectacular sight, and we were well hosted by Leicester City with unrivalled access to the ground’s facilities. The GIMA team kept us entertained and I was so proud that they got all the way to the final! Huge thanks to Perennial and Leicester City, and also to Craig and Deco-Pak for helping to source the football kits.”

Perennial senior development manager Laura Garnett added: “Our thanks go to LCFC grounds manager John Ledwidge and his team as well as all those who took part on the day. It was a great event for Perennial, raising much needed funds and galvanising support. This was the first event of its kind for Perennial and in organising it we have realised what an appetite our colleagues from across the industry have for friendly competition! We are already in talks with further sports grounds to stage similar events in the coming months.”