As the garden retail industry starts to get excited about Glee 2016, the show’s organisers, i2i Events, have announced that the Garden Industry Manufacturer’s Association (GIMA) has confirmed its ongoing support of the show, with a new three-year agreement.

This renewed partnership will see GIMA share its industry-leading knowledge and insight to help add even more value to Glee, providing benefits for visitors and exhibitors alike until 2018, the show organisers add.

Glee event director Matthew Mein said: “We are delighted to announce that GIMA has confirmed its support for the long-term future of Glee. The expertise that they, as an association, can bring to the show is invaluable and will help us to further develop Glee’s role as the key annual event for the garden industry.

“I believe having GIMA by our side for the next three years will enable us to further strengthen Glee’s long-term future as the unrivalled annual platform for the garden industry to meet, do business and address the key issues that are facing us all.”

This new three-year agreement will see Glee and GIMA work closely together to mutually share and develop ideas that will benefit both Glee’s audience and GIMA’s UK and EU supplier members. From improved access and support around attending Glee, to increased visibility at the show, this renewed partnership will add value for all concerned.

GIMA director Vicky Nuttall said: “We are delighted to confirm the long-term continuation of an already strong partnership with Glee’s organisers. Glee remains the foremost UK trade event for manufacturers and suppliers of garden goods and equipment, and as such we felt it was vital to ensure that GIMA and its members maintain a close working relationship with the show. I look forward to working with the team over the coming years, to build a bigger, brighter future for Glee and our members.” 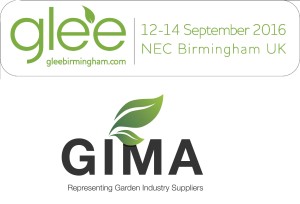 The GIMA Business Village at Glee 2016 will be home to a great selection of up and coming companies exhibiting with the support of GIMA. In addition, there will also be the GIMA Business Lounge, which will provide an ideal place to take a break, arrange meetings and catch up with key suppliers. It will also be home to the “Buyer Connect” speed networking sessions which will see selected exhibitors meet with show visitors for 10 minute slots for a power-networking session.

Back for its third year, the GIMA Innovators Seed Corn Fund (GISCF) will announce its 2016 winner on day one of Glee (Monday September 12). Launched in 2014, the GISCF is designed to encourage new businesses, designers and innovators to enter the garden retail market, and offers a £5,000 prize fund.

Completing the offering will be GIMA’s ongoing sponsorship of the Leaders for Change lunch.  This exclusive event, backed also by The HTA, Gardenex and Gardenforum.co.uk, has been set up to bring together the gardening sector’s most dynamic supplier and retail CEOs and association figureheads; those who are helping to drive forward the garden industry.