The winner of the Retailers’ Choice Award at Glee 2015 was announced at a ceremony on September 16, led by Horticultural Trades Association chief executive Carol Paris and Glee director Matthew Mein.

The Retailers’ Choice Award – first introduced to Glee’s award roster in 2013 – is designed to allow visitors to the show the chance to tell the industry which product has caught their eye, while also representing an exciting sales opportunity in the year ahead, the show organiser say.

Visitors to Glee 2015 have been able to cast their vote since the opening of the show on Monday September 14, and have featured nominations from a wide range of products and suppliers including Think Outside, Wildlife World, Draper Tools, Buttacup, Apta, Petface and Wyevale Nurseries. 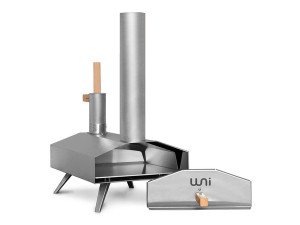 The overall winner drew praise from visitors thanks to its unique design and contemporary styling. The winning product is also highly reflective of the latest consumer trends for contemporary outdoor entertaining, and also of the retailers’ focus on encouraging younger shoppers into store. The Retailers’ Choice 2015 winner is Uuni, with the revolutionary, fast and affordable Uuni 2 wood-fired oven (pictured).

This year two companies have also been awarded the title of ‘highly commended’, drawing an equal number of votes from retailers. Those companies are Deco-Pak with its Buddha head statue, and Eden Greenhouses with its Birdlip Greenhouse.

Matthew Mein said: “Congratulations to Uuni on this exciting win. The Uuni 2 is a great product, and most deserving of the title bestowed on them by Glee’s visiting retailers. Our congratulations also go to Deco-Pak and Eden Greenhouses, who have brought to market two exciting and eye-catching products for the 2016 season. Finally, our thanks go to those retailers who took the time to cast their vote. Their ongoing support of Glee, its exhibitors and awards programme is invaluable.”