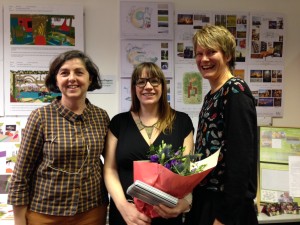 The winner of the inaugural hospice garden design competition run by Greenfingers(1) and KLC School of Design(2) was announced yesterday in a ceremony hosted by KLC at Chelsea Harbour.

The competition, in which entrants were asked to design a ‘teenage space’ for a children’s hospice garden, has been won by former KLC student Rachel Parker Soden whose ‘Halcyon Daze’ teenage garden won plaudits from the team of expert judges.

Back in Spring 2014 alumni from the acclaimed KLC Diploma in Garden Design were invited to enter the competition by submitting a plan for a teenage garden, which will be used in a garden scheme at a hospice in the future.  The brief called on entrants to think about what would appeal to teenagers in an outside space, giving them a dedicated area to indulge in every day teenage activities such as spending time with their friends and listening to music.

The standard of entries to the competition was extremely high and shortlisted candidates were invited to present their designs to a panel of expert judges comprised of Emma Hanford, Greenfingers Garden Projects Manager, and esteemed garden designers Ann-Marie Powell and Clare Matthews.  It was from this pool of finalists that Rachel Parker Soden’s design really wowed the judges.

Emma Hanford from Greenfingers commented: “We were delighted with the quality of the entries; particularly how much the candidates had considered the challenges of building a garden for hospice children and their families.  Rachel’s design, which has a festival vibe included so many elements that will appeal to teenagers including a den, tipi, fire pit and communal spaces where they can relax with friends and family.”

Rachel Parker Soden spoke about her win: “This competition is such an amazing opportunity and I feel incredibly privileged to have had my design selected as the winner.  Being totally in awe of the work that Greenfingers do, I am ridiculously excited to be working with them to make the design concept for the teenage garden become a reality!”

Rachel’s winning design will now go on to be incorporated in one of Greenfingers’ future children’s hospice gardens, giving her a chance to see the garden become a reality and work on a major design project which will have a very real impact on the lives of children and teenagers who spend time in hospices.

On the back of the success of this year’s competition Greenfingers and KLC were delighted to announce today that the hospice garden design competition will become a regular event for KLC students.

Annie Guilfoyle, Director of Garden Design at KLC School of Design, said of the collaboration: “Bringing together KLC and Greenfingers for this competition has provided our students with an exciting platform for their design ideas.  It offers them a fantastic opportunity to see their designs have a lasting and positive effect on the lives of children and young people in hospices who can really benefit from well-designed, stimulating outdoor spaces.  We look forward to the competition going from strength-to-strength and becoming an established feature for KLC students.”