Deborah Skillicorn is to step down from her position as charity director of Greenfingers, it has been announced. After over eight years in the role, Deborah is leaving to pursue consultancy work across the charity industry and beyond.

Deborah first started working with Greenfingers founder Richard Jackson in 2008, bringing her experience in charity management to help him and the founder trustees to focus and grow the charity within the gardening and horticulture industry.

During her tenure Deborah has played a pivotal role in helping Greenfingers develop and grow both in its reputation within the horticulture industry and beyond, and in terms of actually creating many more gardens for children in hospices around the country, the organisation says. Deborah successfully led the charity through its ambitious Rosy Cheeks Appeal and went on to oversee the launch of the charity’s latest A Million Moments Appeal. 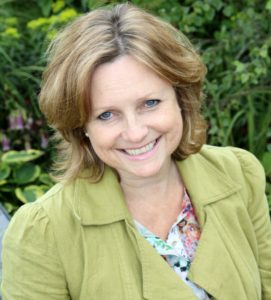 Deborah (pictured) said: “Having originally come in to write a fundraising and marketing plan eight years ago, it feels the right time to step down as director and hand the baton over to others to continue this fantastic and highly inspirational work. My heart remains with Greenfingers but this decision enables me to create the space to focus my own personal interests and ambitions including my passion for blending artisan fragrance.

“I have thoroughly enjoyed working with, and learning from, such vibrant and creative colleagues in the gardening and horticulture industry and I will continue to take a very keen interest in Greenfingers as it creates gardens into the future.”

Greenfingers founder president Richard Jackson added: “Greenfingers was at a low ebb when Debs joined us. Her vision, enthusiasm and skill enabled us to re-build the charity. She has been amazing! Debs has grown our reputation as a charity, established many long-term supporters and donors, and most importantly overseen the creation of all of our gardens over the last eight years. She has been absolutely crucial to our success and we couldn’t have achieved so much without her. We are extremely grateful to Debs for transforming Greenfingers and we’re all very sad that she is leaving but we wish her every success in the future.”

Deborah will step down after the opening of the charity’s 51st garden – the relocation of Matthew Wilson’s 2015 Chelsea Flower Show garden to the Earl Mountbatten Hospice on the Isle of Wight – which will take place on July 18 2016.

Greenfingers chairman John Ashley, said: “I would like to say a big thank you to Deborah for developing Greenfingers into the success it has become during her period as Director. The charity’s reputation is ever growing and certainly within the gardening industry we are extremely well thought of thanks to Deborah – her enthusiasm and commitment has made working with Greenfingers a great pleasure for many people.”

Greenfingers will now begin the process of appointing a charity director to replace Deborah. If you have any thoughts about, or interest in this post, please contact John Ashley – john@Ashleys.me.uk or Sally Whitaker – sallyn8whitaker@gmail.com.