Garden Re-Leaf Day, March 18 2016, this year blossomed into a buzzing week of events. Over £57,000 has already been pledged thanks to the creativity and commitment of garden centres, suppliers and dedicated individuals from the garden industry.

Hillview CEO and Greenfingers Trustee Boyd Douglas-Davies came up with yet another original fundraising idea that has so far raised over £20k for Greenfingers. Demonstrations on how to pot plants took place as customers watched – and even got involved – with the experts potting on and arranging plants which are now being sold to raise further funds for Greenfingers. Some exceptional Plant-athon displays took shape with Flora Media producing special labels for each plant pot.

Fryer’s Garden Centre made the most of the PR opportunity the Plant-athon presented, with BBC Radio Manchester and BBC Radio Stoke as well as the local press getting right behind their event. With help from Blue Diamond managing director Alan Roper and planted well over 1,200 roses to sell on, raising over £565 excluding gift aid. Alan has also agreed to donate £10,000 ahead of the plant sales to enable Greenfingers to start creating new hospice gardens immediately.  https://www.justgiving.com/BlueDiamond 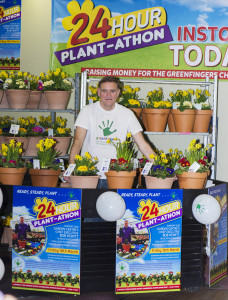 Byrkley Park (part of The Klondyke Group) raised over £6,000 from donations and sales of potted containers.  The group’s chief executive, Bob Hewitt (pictured), made the front page of his local paper as he planted throughout the night. Bob also called for the event to take place again, hoping for 50 garden centres to take part next year . https://www.justgiving.com/Bob-Hewitt1

Squire’s split its Plant-athons between two of its stores – Badshot Lea on Thursday March 17, joined by children from the local primary school – and Twickenham the next day, where managing director Dennis Espley was joined by gardening guru Andy McIndoe and the President of Chartered Institute of Horticulture Andrew Gill. Squire’s has so far raised £2,358, excluding gift aid.

Flora Media and many other suppliers backed the Plant-athon by supplying labels, pots, plants and composts, all ensuring the event was a great Garden Re-Leaf Day success.

Over 30 people from the garden industry walked 20 miles through the Berkshire countryside on the second annual Garden Re-Leaf walk.  Starting and ending in Theale, home of hosts HTA, walkers tested their endurance by making their way through woodland, farmland and along the Kennet and Avon canal – all raising much needed funds for Greenfingers’ children’s hospice gardens.

There were some interesting extra challenges for some, with GIMA Director Vicky Nuttall putting her dog through its paces, and Robbie Cumming from Hornby Whitefoot PR, raising over £500 carrying a hand painted Garden Re-Leaf plank and then stepping off it into the freezing waters of the canal afterwards. Special thanks to Cadix who raised over £2,000 through its Justgiving page and Chris Houfe from British Cards who raised over £1,000 in cash. Matthew Mein and the i2i team raised over £1,500 through cakes sales and other fundraising activities in the office with Martin Simmons and the rest of the HTA team so far at £1,185 and counting. Kelkay sales director Richard Pyrah has raised over £500, with Jackie Eades and Sharmini Martini from Briers, GCA Inspector Alyson Hayward, DLF’s Guy Jenkins and Sutton’s Chris Ramsden also adding to the final total.

Once again the quiz was a popular choice for garden centres in the South East and Wales, with Millbrook, Longacres, Paradise Park (who also had a loose change collection, BBQ competition and cake sale), Perrywood (who also held a raffle) and the Old Railway Line who had its now famous ‘Curry and Quiz’ as well as a £150 raffle prize donated by Scott’s Miracle Gro.

With the nation’s interest in baking still at its peak, garden centres such as Haskins held staff cake sales at Snow Hill, at the head office in Ferndown and at the West End store which singlehandedly raised over £878. Barton Grange made the most of demand for its afternoon cream teas by donating £5 from each one sold.

Still one of the most popular Garden Re-Leaf Day events, raffles were held in various forms by most garden centres, including Monkton Elm who created a vast array of goodies for customers, with £1 raffle tickets on sale in the run up to the day and cleverly placing the winning tickets on display urging customers to return to see if they’d won.

Pughs Garden village enjoyed their 60 mile in-store cycle to the Carmarthen Botanical Gardens, involving both staff and customers – coupled with refreshing hot drinks from the café with each cup raising 50p for Greenfingers. Coolings’ sponsored cycle was inspired by her majesty the Queen’s 90th birthday – with the team cycling the distance of 220 miles from Buckingham Palace to Sandringham, all within the comfort of the shopfloor.

Once again Briers supplied special Greenfingers gloves with 35p donated from each pair sold, as garden centres such as Hollybush, Thetford and Palmer Gardens helped to get the #Gluvies hashtag to reach over 20,000 people all over the UK. Briers also launched a new product to benefit Greenfingers this year, in the form of a children’s gardening set that included a fork, trowel and gloves adorned with the #Gluvies hashtag to further boost awareness for the cause.

Gardman supported Garden Re-Leaf Day this year through a range of produces including a special charity doormat for garden centres this year, with 50p being donated for each one sold.

A new initiative for 2016, the tool exchange, whereby customers were encouraged to donate old gardening tools in exchange for 20% off Crest’s Kent and Stowe range, was trialled by Thetford Garden Centre in Norfolk, who also held a tombola and donated £1 from each soup sold in the café.  All donated tools will be sent away by Crest to be auctioned as part of Greenfingers’ long-running ‘Old into Gold’ campaign.

GTNXtra’s Trevor Pfeiffer started his Garden Re-Leaf challenge way back at the GCA conference in January, bravely announcing he would lose two stone by March 18.  A week before the event he still needed to shed a few pounds but using the Theale walk as an extra boost he managed to overcome all the odds and has so far raised over £110 for Greenfingers. He is continuing with his fundraising by aiming to lose another stone by the Chelsea Flower show.  https://www.justgiving.com/Trevor-Pfeiffer.

A number of other companies – and even a school – joined in this year. Corby & Fellas donated three laptops and a PC to help boost the effectiveness of communications, social media and fundraising this year. Brookes & Co held a bake sale and Boston Academy had pupils designing their very own Greenfingers ‘Gluvies’.

Bridgeman opened a new garden furniture store in Amersham and supported Garden Re-Leaf Day during their first week of sales. Jamieson Page and his Town and Country sales team organised a collection box distribution amongst garden centres and Fallen Fruits helped Van Hage raffle off one of its Dog Benches worth £150.

This year Greenfingers launched the ‘A Million Moments Appeal’, which aims to raise £1 million, over the next three years.  With the help of events such as Garden Re-Leaf Day, the charity is aiming to bring the precious gift of a garden to at least 5,000 children, and their families, who spend time in hospices across the UK.