As the garden retail industry shows its continued support for the GIMA Awards with a record-breaking number of products entered to win one of the coveted prizes, it has been confirmed that comedian Hal Cruttenden will host the 2017 awards ceremony (July 13, Celtic Manor Resort, Newport South Wales). 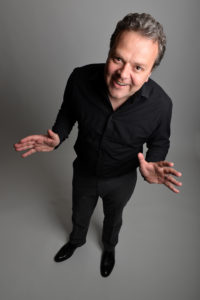 Hal, who is best known for his work on BBC’s ‘Mock the Week’ and ‘Have I Got News For You’, as well as his own stand-up show, and Radio 4 sitcom ‘Hal’, is also a three time Chortle Award nominee and was previously nominated for the Perrier Newcomer Award in Edinburgh. Hal also took part in the ‘Hell on High Seas’ challenge’ where six celebrities and a professional crew sailed from Belfast to London on a Volvo 65 Racing Yacht facing very rough weather and sea sickness to raise over a million pounds for Sport Relief. Their progress was shown each night on BBC 1’s ‘The One Show’.

It will be Hal’s job to lead proceedings on the night, where he’ll be joined on stage by the winners of this year’s hotly contested awards.

GIMA director Vicky Nuttall said: “Hal is going to be a fantastic addition to the awards. He is a highly recognisable and loved comedian, and no doubt he’ll keep us laughing throughout the evening.

“It’s also great to be able to confirm that we have received a record number of entries for the 2017 awards. Our judges are going to have their work cut out as they choose the winners during our dedicated judging day later this month. A huge thank you to all those that have entered.”