British greenhouse and glasshouse manufacturer Hartley Botanic showcased some of the drought-tolerant and tropical plants increasingly being grown by UK gardeners ‘under glass’ as a result of our warming climate at RHS Tatton Park this year. 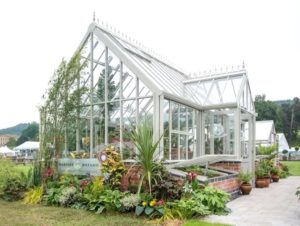 The stand, which has been awarded five stars, featured four of the manufacturer’s handmade greenhouses and glasshouses and demonstrated how modern plant tastes and greenhouse usage is changing as gardeners increasingly enjoy more al fresco lifestyles and face blistering heatwaves during the summer.

Plants on the stand, designed and planted by landscape and garden maintenance company Base Squared, included architectural tropicals, hardy succulents and an exotic take on grow-your-own. The contemporary trend-led plantings are juxtaposed against a historical anniversary for Hartley Botanic, which this year, will have been making its handcrafted greenhouses and glasshouses for 80 years. Key to the Lancashire manufacturer’s success has been its single-minded focus on customer service and its ability to respond to changing trends and tastes amongst gardeners.

Hartley Botanic managing director Tom Barry commented: “Hartley Botanic has always moved with the changing needs and tastes of its customers and we wanted to communicate this through the stand’s trend and climate-led plantings. This ability to respond to the times has also been a key factor in Hartley Botanic’s 80 trusted years, making the finest aluminium greenhouses money can buy. While we may be a historic British business, our products are constantly evolving and so is the way gardeners are using them.”

Base Squared director Thomas Hearn added: “The last few years has seen an incredible upsurge in demand for tropical-style plants which not only have a trendy look, they are also more able to flourish in the UK’s warming climate – and do especially well ‘under glass.’ There is no doubt that climate change is influencing the choices of the UK’s gardeners and a stand with this theme felt particularly appropriate with the backdrop of our current heatwave.”