Greenhouses are no longer the exclusive preserve of elderly men with pipes and wellies pottering with trowels. In 2019 they’re just as likely to be used for parties and entertaining as younger families admit they see them, not just as a route to healthier and eco-friendly living, but as luxury lifestyle accessories – according to Hartley Botanic, who have shared their predictions for how their greenhouses and glasshouses will be enjoyed in 2019 based on recent customer behaviour.

The trends, which have been released at the end of Hartley Botanic’s 80th anniversary year, reveal how modern gardeners are using greenhouses within their gardens, their most important motivations for ownership and the most in demand styles and designs. 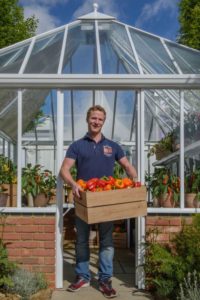 At the heart of greenhouse ownership in 2019 lies the fact that many people want to live more healthily with a focus on enjoying good quality fruit and vegetables which they are confident producing themselves. The manufacturer found that while 95% of customers expected to use their greenhouses to grow food and decorative plants, most of them did so because they wanted to eat better.

Some of Hartley Botanic’s customers exclusively use their greenhouses for food ‘production’ with even very large structures being given over to the exclusive growth of fruit and vegetables for customers and their families.

Many Hartley Botanic customers cite that their greenhouses give them surety of the quality of the produce they eat. They can guarantee the food they produce is organic and they believe the fruit and veg they grow tastes superior to supermarket equivalents.

The second most significant predicted trend citied around greenhouse usage was their purpose as multifunctional spaces. While recent customers may have initially purchased a Hartley Botanic greenhouse with horticultural production in mind, once installed, they soon become a peaceful place to enjoy the garden or the fruits of their gardening labour, away from the intrusions of modern life.

30% of recent Hartley Botanic customers also expected to specifically use their greenhouses as an al fresco entertaining space at the point of purchase. A greenhouse allowed them to extend the length of time it was possible to entertain outdoors and many customers use them as additional, al fresco areas for socialising 8 or 9 months of the year.

TREND 3: GREENHOUSES AS A STATUS SYMBOL

In recent years there has been a definite change in the way customers view their greenhouses – instead of being just a functional building, in 2019 gardeners will increasingly view them as almost lifestyle accessories and to an extent, status symbols.

Imposing and grand Victorian structures are increasingly popular, with customers using them to frame and display ambitious plant collections in a similar way to the hothouses of the Victorian era. The Victorians filling their large glasshouses with exotic ferns and giant palms is still a very covetable look which customers recreate today. One Hartley Botanic customer recently shared that she liked to “show off” her greenhouse to other members of the gardening club she had joined.

TREND 4: CITY DWELLING FAMILIES WITH YOUNG FAMILIES, NOT JUST THE RETIRED IN THE COUNTRY

In terms of customer demographic, Hartley Botanic’s customers are changing. From a group primarily composed of the over 50s and the retired to a more mixed customer base which includes younger consumers usually with children and the manufacturer expects this change to increase in 2019.

This seems to be driven by both a desire for children to benefit from home-produced food (both from an experience and a health point of view) and by the fact that market conditions mean families are moving less and investing more in their existing properties.

Families moving less frequently has also influenced interest from urban customers and in the last year there has been a renewed greenhouse demand from city dwellers.

Hartley Botanic sales manager Christopher White commented: “In general there is a growing demand amongst city dwellers for greenhouses – both in the UK and abroad (we have seen considerable growth from the US’ major cities over the last two years.)

“London, for example, is hugely diverse in terms of its ‘under glass’ growing tastes and the preferences of its homeowners. Commonly however, we are experiencing increased demand for larger and lean-to structures which we believe reflects a customer desire to invest long-term in their homes. We do still see a demand for small, practical greenhouse solutions for city dwellers but increasingly homeowners want something which makes a beautiful statement in their garden and will last over time, as well as serving a practical or hobbyist function.”

During 2019, as with the last 22 years, Hartley Botanic foresees that its traditional Victorian range will still been the most popular greenhouse design and look chosen by customers. It is felt that this has been influenced by a trend for exotic plants and ferns which are perfectly set-off by a Victorian aesthetic. The largest Victorian glasshouse Hartley Botanic has produced for a customer in the past year was more than 150 square metres in size.

Of their Victorian range, Hartley Botanic managing director Tom Barry said: “It’s an iconic look which was somewhat set in an era when plant-hunters filled their greenhouses with exotic plants, ferns and giant palms. That’s still very covetable even today. It has classic beauty and style as well as a historic appeal.”

As well as the ‘grow your own’ benefits of improved quality and taste, 2019 gardeners will be using a greenhouse for environmental reasons.

Current Hartley Botanic customers cited a key motivation in using a greenhouse for food production was around reducing air miles and concerns for the environment. Modern greenhouse owners have concerns for the use of chemicals in the production of fruit and vegetables but also about the environmental effects of transporting produce over long distances.

Many customers also felt that using a greenhouse to produce their own fruit and vegetables had significantly reduced their day to day consumption of plastic packaging – an issue they were increasingly concerned about.