Colin Randel, product manager and vegetable expert at Suffolk-based mail order plants and seeds firm Thompson & Morgan has been presented with an engraved commemorative garden fork and spade in recognition of his 50 year contribution to horticulture.

Veteran gardening writer, The Sun columnist and broadcaster Peter Seabrook, who has known Colin for many years, was on hand at RHS Garden Hyde Hall, where Thompson & Morgan was holding its press day, to make the presentation. 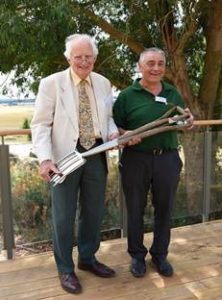 Peter commented: “Colin is a real treasure; his knowledge and experience in the world of vegetable growing is remarkable. Whenever I come up with a query on vegetables he is, and has been for many years, my first port of call. He is to be congratulated on his 50 years’ working in the seed trade and on his loyal service at Thompson & Morgan over the last 18 years. Long may he continue to serve vegetable-growing gardeners at home and abroad.”

Colin’s love of gardening started when, as a young boy, he would help in his grandmother’s garden, planting potatoes and runner beans. He left school at 16 and has been working in horticulture in one form or another since then. Colin learned much of the basics of gardening with the head gardener of the Parker-Bowles estate, Donnington Castle House in Berkshire. As an apprentice, he took day release to the local agricultural college to add to his practical horticultural knowledge. Over the next 26 years, Colin worked developing seed lines at several companies in Berkshire, Devon and Suffolk before moving to Thompson & Morgan in Ipswich in 2000 to develop the company’s seed potato business.

Thompson & Morgan’s commercial director Chris Wright said: “Colin has been part of the fabric of Thompson & Morgan for 18 years now and he has developed and launched many new and exclusive vegetable lines to UK gardeners. We’re very lucky to have benefited from his incredible fount of knowledge over the years and so we were keen to celebrate his half century in horticulture with this presentation.”

One of the highlights of Colin’s career was his invitation in 1995 to join the RHS Garden Wisley vegetable trials committee. He enjoyed working with other vegetable specialists on this prestigious board for 23 years, acting as Chair for 8 years from 2006.

Colin remarked: “I was most surprised when Peter made his presentation last week. Of course I know how long I’ve been working in horticulture – time does fly when you do a job that you’re passionate about – but I wasn’t expecting to have this milestone recognised with so many kind words and congratulations!”