In celebration of its 20th year of trading, Coventry-based HydroGarden Wholesale Supplies Ltd has embarked on a long term sponsorship of Zuuranys Primêr, a primary school near Kareedouw, in the Eastern Cape of South Africa.

HydroGarden employee Daniel van Straaten approached the board of directors on behalf of the school where his mother is the principal to find out if they could offer any support. Anna van Straaten started teaching at the school in 1991 and was promoted to principal in 2003. It offers free education to 54 children from age five to 13 and has three full-time teachers and one volunteer. The school is located on a farm, on land the Department of Education rents from the land owner. It has no electricity or water, and very little in the way of furniture and educational resources.

The school’s first request was for HydroGarden to buy stationery for the children to use during their lessons. This has now arrived at the school and the teachers are thinking about how another £1,000 in sponsorship could be used in other ways to support the children.

In the South African education system the schools are classed in different categories and Zuuranys is in one of the poorest categories, which means the pupils do not pay any school fees. It receives just £4 per year per pupil from the Government which is not enough to cover all the expenses. It supplements its funding with donations from local businesses, farm owners and the teachers themselves make donations. 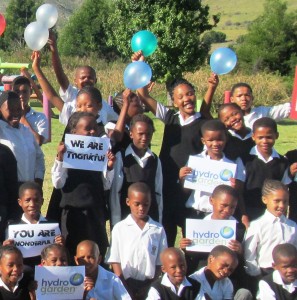 Principal of the school Anna van Straaten, spoke about the children who attend the school and the opportunities it offers them: “The majority of parents of the pupils are farm labourers. They are very poor and cannot offer their kids a lot. We try to offer them as much as possible. They get the opportunity to do sports, like netball, cricket, rugby and athletics. Once a year we organise a trip to the sea which is funded by the teachers who use their own cars to take them. None of the parents have transport. In South Africa public transport is not like it is in Europe, it does not even exist, so we use our own vehicles to take them to the seas and to sporting events. The school also supplies the children with sportswear and tracksuits.”

HydroGarden director Jonathan Aldridge spoke about the sponsorship: “It’s always particularly fitting for us to support charitable projects that are linked to our staff members,  so when Daniel told us about his mother heading up the school in South Africa we were naturally interested in finding out more about what we could do to help. We are keen establish on ongoing relationship with Zuuranys Primêr so that we can make a real difference to the quality of the resources the school will have to use during lessons and the other activities the children have the opportunity to enjoy.”

HydroGarden is an inventor, manufacturer and distributor of specialist hydroponic equipment in the UK and internationally. Some of its innovations, including its vertical hydroponic farming system VydroFarm, and its aquaponics system FishPlant, are being used for educating young people in the UK about alternative ways of producing food.