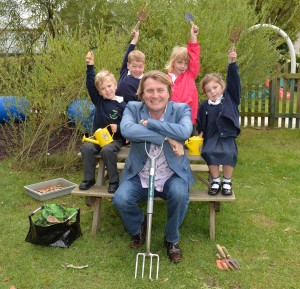 TV gardener David Domoney urges parents to encourage their children to pursue in messy activities such as gardening, and take them away from the Internet.

Garden ProvocateurDavid Domoney, co-presenter of ITV’s flagship show Love Your Garden, is highly concerned about the ‘disconnect’ between children and nature – largely due to rise and rise of the Internet.

“Where has the simplicity of a garden treehouse for children gone, asks Domoney, where they can climb a tree and connect with nature? A simple tree for kids to climb. A connection with the outdoors”.

Domoney, who also features on ITV’s This Morning, responds to a poll by Persil which found that more than half of parents encourage their children to avoid messy activities such as gardening and baking.

One in three children say that they did not like getting dirty with their preferred activities being television watching and playing on video games.

Responding to this survey, Steven Chown of children’s charity, Play England, believes that parents are becoming increasingly ‘risk-averse’, but Domoney suggests that this attitude is damaging to the world’s horticulture.

“We are fighting an uphill battle with the Internet,” says Domoney. “And gardening is the loser”.

According to a recent report by communication regular Ofgem, teenagers today spend over 32 hours each week either watching television or on the Internet. The time is evenly split between the two activities. That’s an increase of 2 hours per week in terms of online usage year on year.

A RHS survey last year revealed that 70 per cent of 18-year-olds do not think gardening is a career to be proud of.

“The internet and political correctness has cut off our children’s greenfingers,” according to Domoney, who founded Cultivation Street and the Young Gardeners competition in association with Prince Charles.

Political correctness is also the enemy of children connecting with the outdoors and a sense of adventure, according to the TV gardener.

“We need a fundamental shift in the how connect children with the outdoors and not take the easy option of linking them up to smartphone, iPads and video games consoles to educate and entertain them,” adds Domoney.

The trend towards screen-based entertainment is alarming. A recent survey of 1,000 16-24 year olds by the Institute for Advanced Studies at Lancaster University indicates 75% of young people claim they could not live without the internet; 45% of young people said they were happiest online and 86% love new technology.

The RHS, organiser of the Hampton Court Palace Flower Show, says gardening is facing a skills crisis because of an ageing workforce and a lack of young people coming through.

Domoney says “Young people spend too much time in front of a screen. It’s highly addictive and unfortunately the virtual world seems more real than the real world for a lot of youngsters. We need to do everything in our power to get youngsters to reconnect with nature”.

David is actually campaigning to encourage parents to engage their children in the wonders of the garden.