John Hillier retires from the Hillier board of directors

Garden centre and wholesale nursery operator Hillier has announced that fourth generation member of the family business, John Hillier, is to retire from the Hillier board of directors.

Founded in 1864 when Edwin Hillier opened a florist shop in Winchester, today, Hillier operates 12 garden centres and a wholesale nursery, as well as specialising in suppling semi-mature trees to the landscaping industry.

Hillier prides itself on its family involvement in the business, and a key innovator over the last 60 years in driving the expansion of the business and the introduction of new plants has been John Hillier. John has recently decided to retire from the Hillier board of directors, aged 83, and hands over to the new generation as two members of the fifth generation of the family join the board. 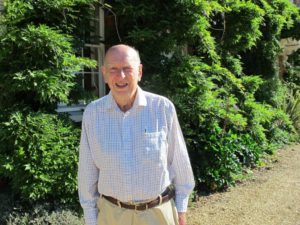 As part of the fourth generation of the family, John has seen the company undergo significant changes and developments into both the commercial and horticultural worlds.

He is the eldest son of famed plantsman Sir Harold Hillier, who was the great grandson of Edwin Hillier and founder of the Hillier Arboretum, or the Sir Harold Hillier Gardens as they are now known. John and his younger brother, Robert, spent their childhoods growing up in the Arboretum, which was also the site of the family home, and got to witness their father’s dedication to plants first hand.

Sir Harold, like his father, grandfather and great grandfather before him, had a special prowess for combining being a knowledgeable, passionate plantsman with being an astute businessman, something which he passed on to his sons, both of which he encouraged to experience the horticultural business from the ground up.

John worked in the family business until he was called up on National Service in Libya. Upon returning he spent time working at two nurseries in America before coming back to England to work at the company’s nursery in Eastleigh. It was straight back to work for John; as soon as his ship from the USA docked in Southampton in 1958 he was whisked straight to London to work on his first RHS Chelsea Flower Show. The following year, looking after the company’s exhibit at the world-famous show became John’s responsibility. He still works the Hillier stand at Chelsea every year.

When Sir Harold Hillier retired, John and his brother Robert headed up the company and helped to transform it to the commercial entity that it has become today. In those years they grew the business from an annual turnover of £600,000 to the £33 million it is today.

John has always been concerned that plants should be useful for home gardeners and this theme is still evident today in the Hillier Chelsea Flower Show exhibits. Part of the Hillier ethos is to inspire people to be able to create beautiful gardens at home, which is something Hillier has encouraged for some time. Whilst the people behind the scenes are incredibly knowledgeable about plants from all around the world, they aren’t elitist and aim to encourage those who are starting their gardening journey by imparting their knowledge and helping people enjoy everything gardening has to offer.

This is evident in John’s work into discovering new plants. For him, ensuring that new plant discoveries are suitable for modern gardens and domestic gardeners has been imperative. He has worked on many RHS committees and been involved in Hillier’s own extensive Research and Development into new plant varieties, always making sure the home gardeners are kept in mind.

John also played a prominent role in the developing of the company’s wholesale and mail order business which originally formed a vast part of the business. He has most recently worked with Roy Lancaster to publish the eighth edition of the Hillier Manual of Trees and Shrubs, a popular reference book first published in 1971 by Sir Harold Hillier.

In 1996, John’s dedication to plants was recognised by the RHS when he became the third Hillier to be awarded the RHS Victoria Medal, the RHS’s highest accolade.

After more than 60 years with the company, John is now retiring to make way for the future generations of Hilliers with Martin and George Hillier, his son and nephew respectively, joining the board.