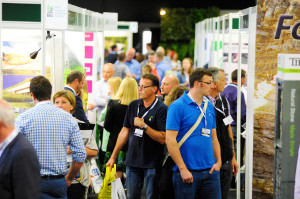 The LANDSCAPE Show at Battersea Park on the 23rd & 24th September was a huge success, enjoying two days where the industry united under one roof.

The industry’s premier trade event for the entire interior and exterior landscaping industry was back in full-force with visitor attendance up and exhibitors already re-booking for next years event. 1624 trade specialists attended the show, an increase of 28% compared to 2013 which is partly due to the increase of exhibitors, up by 21% on 2013, bringing an even bigger range of products and industry knowledge. Combined, there was a total of 2558 delegates within the venue across the two days. Featuring some of the best known and most unique manufacturers and suppliers from across Globe, the event attracted visitors from 29 different countries including: Dubai, Ireland, Australia, USA, Spain, Italy, Canada, Netherlands, Japan, Belgium, France, Bulgaria, Sweden, Germany, Denmark, Finland, Austria, Latvia, Poland, Russia, Israel, Trinidad, South Korea, Singapore and Nigeria. 93% of the visitors were able to heavily influence or make the purchasing decisions. The focus was on high net worth projects for wealthy clients within London, the Home Counties and abroad.

* This year saw the Young Horts host their first Autumn Conference, which brought an additional 250 designers and landscapers of the future to the event.

* The BBC Radio 4 Gardeners Question Time was recorded at the event.

* The London College of Garden Design hosted their series of Master Classes, bringing together 12 industry leaders to talk about design, build and planting,

* The APL held their regional Cluster Meeting at the show

* The Society of Garden Design held their AGM and launched their Product of the Year at this years event (won by Lateral Design Studio). LANDSCAPE was also thrilled to welcome a range of international speakers and for the first time, all sessions were CPD credited, bringing the opportunity for every attendee to gain education points to further their career. With 71% of space from LANDSCAPE 2014 being re-sold for 2015, LANDSCAPE is gearing up to be one of the leading shows in the industry for years to come. Increased marketing towards commercial projects will help bring even more of the industry together in 2015.

With a growing demand from designers and landscapers for indoor and outdoor products it means the grass is even greener for LANDSCAPE 2015. LANDSCAPE 2015 will be back at Battersea Park, London on the 22nd & 23rd September 2015.