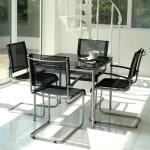 One of the more ambitious environmental kite mark schemes to be introduced to the retail sector is being proposed by the Leisure and Outdoor Furniture Association (LOFA).
Lofamark aims to give retailers and purchasers the opportunity to make buying decisions based on a product’s environmental impact, a précis of which will be shown on a label. The scheme will be open to all manufacturers of outdoor furniture and equipment who are members of LOFA.
Steve Hallam is the man project-managing the scheme, which he claims has met with widespread interest at all levels. “I have had meetings with civil servants, manufacturers, marketers and environmentalists and everyone has been fascinated by what we are trying to do. Some may think we have bitten off a lot to chew but mostly people can see where we are coming from and think it’s a great idea,” he says.
The scheme is certainly ambitious: LOFA intends to look through the entire product ‘story’ to ensure that there are no nasty surprises – such as the use of child labour or wood taken from unsustainable forests. It will also work out the carbon footprint for each product based on the processes used to create it. The labels will contain information specific to each item, highlighting a tangible environmental aspect, in a way that will hopefully inform rather than confuse the buyer. “We don’t want to overload the consumer,” says Hallam. “We want to help them to choose between products. We believe that buyers respond to something specific, such as ‘dolphin-friendly’ on a can of tuna.”
LOFA intends to employ the services of an independent panel of accreditation experts to judge each product and Hallam concedes that there may be those who disagree or are unhappy with their rating, therefore an appeals process will also be introduced.
“The whole area is very judgemental,” he says, “but the aim of the scheme is an honest, genuine attempt to make a difference. Once they hear ‘environmental accreditation scheme’ people think that you are trying to solve the world’s problems – that’s not the case – we are just trying to do something worthwhile.”
There are a number of benefits to the industry in introducing a scheme of this type. If it is successful, the gains will be commercial as well as ethical. Products with the Lofamark will be more attractive to consumers than those without and this in turn will prove a powerful incentive for manufacturers who are not members of LOFA to join up.  Retailers that stock products from LOFA members should also benefit from increased sales.
Hallam pointed out that there is increasing evidence that consumers are finally turning green intentions into actions – and that they expect manufacturers to take a lead.  As evidence that consumers are now taking environmental issues more seriously, recent research has shown that:

But in addition to this, Hallam sees the move to introduce a scheme of this nature as pre-emptive. “We believe that it is only a matter of time before something like this could be imposed on the industry. Therefore, by getting in there first we can hopefully avoid this and end up with something much better that we have worked out for ourselves,” he says.
How the scheme will be funded is one of the details that has yet to be worked out but the LOFA council is looking at it. The timing of the scheme is also not yet set in stone. Hallam hopes to have something to present to the industry at SOLEX 09 with information going out to consumers the following year, when products that are part of the scheme will be in stores, ready for consumers to buy.
“We may start with some product sectors before others,” he says. “The main priority is to get things right, rather than to meet a deadline.
The success of Lofamark rides on it being accepted and respected by the trade as well as consumers. “The whole scheme is based on a thorough purist methodology. We want it to be simple and affordable enough, while accurate and credible enough to bring about change and make things progressively better,” says Hallam. “The scheme must be practical enough and acceptable for manufacturers to operate, or it simply won’t work. We anticipate that LOFA will provide administrative support to our members to minimise what they have to do themselves.”
Keeping the scheme simple may seem like an impossible task, given the size of the industry and the range of the products on offer. Hallam concedes, “Certainly it is complex and it will be a challenge considering some materials and products are sourced out of the Far East.”
However, Hallam still believes that a lot of the accreditation can be done by looking at product type. “Take aluminium chairs, for example. The process that goes into making one of these is similar, whoever the supplier is. We can analyse the environmental impact by looking at the weight of the item, where it was made and how far it has travelled,” he says.
The scheme will be backed up by a website, which will contain extra information about the ratings, the products, how best to use them and also the best place to dispose of them after the consumer has finished with them. “The recyclability of products is something we are thinking about for the future,” says Hallam. “But for the moment, we are highlighting that some products that are better than others. We may be saying, ‘this practise is not acceptable’ in some few cases and we are hoping that the Lofamark will act as an incentive to product development in order to make a difference.”
For further information telephone 01243 839593, fax 01243 839467, e-mail info@lofa.co.uk or visit www.lofa.com