The Garden Re-Leaf Day Plant-athons this year will look to bring an added element of excitement to garden centres when they begin towards the end of next week (from March 16).

Featuring inter-store competitiveness, a father and son team, and tests of stamina and speed – this year’s participants will be looking to raise more than £23,000 for Greenfingers.

Supporting the event nationwide are Elho – supplying pots, and Floramedia – suppling labels – both boosting value to every plant being sold during and after the plant-athons.

Last chance to sign up
If you would like to set up a 24hr Plant-athon for your Garden Centre, there’s still time, but it’s running out!  Contact Linda in the Fundraising Team by email as soon as possible – linda@greenfingerscharity.org.uk or call the Greenfingers office on 01494 674749.  Alternatively, fill in this form online – www.gardenreleaf.co.uk/register-an-event.
Check out the JustGiving Garden Re-Leaf fundraising event page here: www.justgiving.com/campaigns/charity/greenfingers/gardenreleafplantathon

Never one to rest on his laurels, the event’s founder Boyd Douglas-Davies (who on the day will be taking part in the Garden Re-Leaf Walk) is planning on upping the ante with ‘Mega-thons’ taking place in every one of his 11 Hillview stores. But what is a Mega-thon?

Boyd explains: “This year I really wanted to get all my teams involved in the fundraising.  And because I’m so nice I decided I’d let them off the 24hr aspect… and get them all planting from 9am on Garden Re-Leaf Day! Each Hillview store will plant 101 spring containers and then the race is on to see which store can sell them the fastest! As a group we’ll plant 1,111 containers so it’s going to be more than a grand effort!” 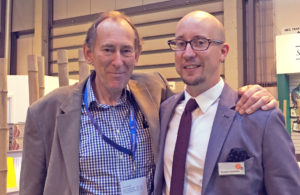 All of the money raised from the plant-athons and many other Garden Re-Leaf Day events this year will once again go towards Greenfingers’ ‘A Million Moments Appeal’.  Greenfingers aims to raise £1 million under the banner of the A Million Moments appeal over three years to enable at least 5,000 children who spend time in hospices, and their families, to enjoy spending precious time together outdoors.