Michael Cole has announced his retirement from Notcutts Garden Centres after 38 years with the company.

During this time Michael (pictured) worked his way through the ranks from Planteria assistant going on to fulfil a variety of roles including garden centre manager, regional manager, managing director and more recently business development and retail property director.

Michael, who has overseen the development of new style Notcutts garden centres in Tunbridge Wells and Nottingham (Wheatcroft), will finish in his role as business development and property director in January 2017. Until then, he will maintain full responsibility for the leadership of this part of Notcutts. He is currently directing refurbishment projects at the company’s Norwich and Staines garden centres. 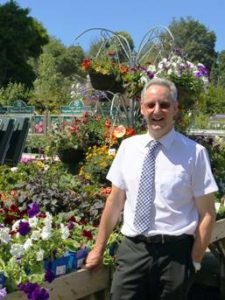 After stepping down early next year, Michael is expected to maintain his connection with Notcutts in a part time advisory role.

He commented: “I have had a wonderful association with Notcutts spanning almost four decades. I have been proud to have been involved in so many chapters of Notcutts history. Having had an eye towards retirement in recent years, I have finally decided that the time is right to spend more time with my partner Fiona doing all those things we have put off for so long. At the top of the list is our own project garden – something that fills me with great excitement.”

He added: “It’s rare that you can get the best of both worlds when you announce your retirement but I can now look forward to pursuing new interests whilst also being given the opportunity to retain my links with Notcutts as I have been invited to stay on in a part time advisory role. The company has exciting forward plans and I’d be delighted to still contribute to these in a new capacity.”

Notcutts CEO Nick Burrows said: “Michael has been a massive contributor to many chapters of Notcutts’ illustrious history. His personality is well known throughout the company and indeed the horticultural sector. Boundless energy, huge enthusiasm, wonderful leadership and unmatched garden sector expertise are all part of Michael’s make up. He has been a true ambassador for Notcutts during his career and we are sure this will continue after he moves into semi-retirement.”

Caroline Notcutt, who has watched Michael Cole’s emergence as an industry pioneer, added: “I wish to place on record my considerable thanks to Michael for all that he has done for Notcutts. A true gentleman, a wonderful servant to the company and a friend to so many of us.”

Notcutts will be looking to recruit a replacement for Michael Cole over the coming months to lead a programme of redevelopments and refurbishments across the company over the next five years.