The trend for mobile gardens is set to continue, according to family owned wholesale grower Wyevale Nurseries, as figures reveal home ownership among 25-34-year-olds is decreasing with more young people renting instead. 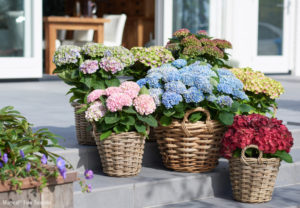 Wyevale Nurseries managing director Andy Johnson said: “With an increasing number of house renters, the pick it up and take it with me garden is a trend set to continue.

“There is always going to be a market for that instant splash of colour on the patio. However, the mobile garden is going to be more than just instant gratification. Millennial gardeners want to bond with their plants and have that strong emotional connection with them.

“There is now an increasing range of 21st Century shrubs. Shrubs which will grow happily in patio pots and that the millennial renters can bond with in the safe knowledge that their beloved Phormium can be transported on the back of a removal van.”

He continued: “We grow a selection of plants such as the quirky Jacobinia ‘Firefly’, colourful Hydrangea Magical series and the structured Phormium ‘Blondie’ perfect for the renting household meaning they don’t have the hassle of replanting each year. Young gardeners are seeing their patio as their new dining room – it just needs some plant décor.

“Flowering from late December through to early summer ‘Firefly’ provides an eye-catching display. It is an attractive, compact growing, very rounded shrub, which is dripping with tubular bicolour flowers, vivid orange at the base changing to bright yellow at the tip. A sun loving plant which will bring early season colour to any garden.”

Phormium ‘Blondie’ was featured as one of the top 20 new plants of 2018 at Chelsea. It is a distinct Phormium, which has a unique weeping habit unlike any other. It will grow into a tight clump up to 80cm tall and 60cm wide with a distinct, strongly arching habit, similar to a chlorophytum.

The leaves are variegated with a cream stripe down the midrib and a green margin. ‘Blondie’ is particularly suited to growing in a patio container where it can be left to gracefully arch over the pot.

Andy added: “In 2017 we became the sole UK grower of the Hydrangea Magical Series (pictured). This is an extremely successful multi award-winning Hydrangea series, which has only been available from nurseries outside the UK.

“The ‘Magical’ flowers change colour three to four times during the course of a single year, resulting in a spectacular garden display. These fantastic garden plants are suited for patios, terraces or borders.

“There are eight different varieties including the Plantarium 2015 Best in Show winner Magical ‘Ruby Tuesday’. They flower very early and are compact and robust plants.”