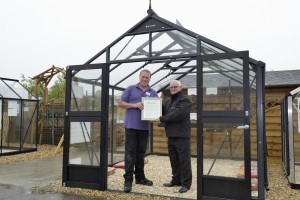 A SOMERSET garden centre was recently (May, 2015) named as the top selling site for Eden Halls’ Juliana branded greenhouses in the UK.

David said: “In September 2013we launched our range of Juliana branded greenhouses and during the 2014 season Monkton Elm came out as the top selling site in the country.

“We’d like to say a huge congratulations to the team and thank them for their hard work in sales and dedication to us.”

Eden Halls is a British company that has existed since 1936 and it was the first in the world to mass-produce greenhouses. It is closely associated with English gardening traditions and provides quality greenhouses at reasonable prices.

Chris Hawkins, Patio and Landscape Manager at the garden centre, said: “We’re absolutely thrilled to have been named as the top garden centre for sales of the Juliana greenhouses.

“It’s great to have received the certificate as recognition of our hard work. It will take pride of place in the greenhouse section of the garden centre.”

For more information, please visit the garden centre, which is located just off the A38 at Monkton Heathfield between Bridgwater and Taunton, call 01823 412381, visit www.monktonelmgardencentre.co.uk, log on to www.facebook.com/Monktonelm or follow the company on Twitter by visiting www.twitter.com/Monktonelm.