A Montgomeryshire nursery has opened a new state-of-the art retail site to meet growing retail and wholesale demand for specialist plants, with the support of a six-figure finance package from HSBC.

King’s Nurseries, which has been co-owned by husband and wife Marcus and Claire King for almost 20 years, has used the HSBC funding to purchase a six-acre site in Garthmyl, Montgomeryshire. The new retail plant centre officially opened on Saturday April 1 and will house thousands of specialist plants including surfinia hanging baskets, geraniums and begonias. 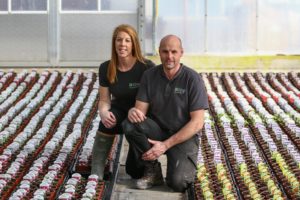 The funding has also been used to construct 65,000 sq ft of greenhouses set over three acres, as well as a streamlined modern till system in the retail area for the public to purchase plants. Four new jobs have been created in the local area as a result of the deal, one full-time role and three part-time seasonal roles.

King’s Nurseries co-owner Claire King said: “Expanding the small nursery we own near our home has been a dream of ours for many years. Thanks to the HSBC funding, we’ve been able to achieve this with the launch of our new retail site on Saturday. Making a measurable difference in the local community is a shared passion of ours and HSBC’s and it was a joy to see our customers’ reactions to the new facilities.”

HSBC area director for North Wales Martin Lyons added: “King’s Nurseries has been an HSBC customer since it was established in 1997 so we have a thorough understanding of the company’s evolving finance requirements. It’s been brilliant to watch them ‘grow’ as a business and respond to increased demand for their products. This latest round of funding will help them fulfil their ambitious development plans and expand their customer base.”

King’s Nurseries is a specialist producer of bedding and basket plants, perennials, trees and shrubs and supplies to pubs, hotels, local authorities, garden centres, flower shops and market traders in Wales and the Midlands.