A rising star from horticultural label and POS supplier Hortipak has been recognised by the UK printing industry as a Young Person of Outstanding Achievement having being awarded the 2017 Victor Watson Trophy.

Lauren Sharples, who works for Hortipak at Kirkbymoorside-based owners Ryedale Group, received her award at the All-Party Parliamentary Print Group Reception at the House of Lords on Tuesday July 4. She was also presented with a bursary of £1,500 which is to be used for further personal development. 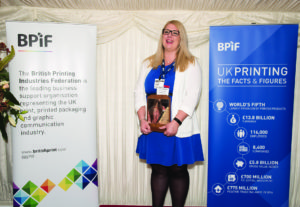 The national award was started last year in the memory of the renowned Victor Watson CBE DL, the businessman and philanthropist who was the Chairman of the Monopoly board-game maker Waddingtons from 1977 to 1993.The award is supported by the BPIF (British Printing Industries Federation), The Printing Charity and The Worshipful Company of Makers of Playing Cards. Entries are open to anyone under the age of 31 and are open to roles across the printing industry and its supply chain including printing, publishing, manufacturing or operating presses, driving, cleaning, advertising, photography, graphic arts, making ink and recycling paper.

Managing director of Hortipak owners Ryedale Group James Buffoni commented: “The whole team at Hortipak and Ryedale Group are delighted that Lauren has been acknowledged by her industry for her outstanding achievement and we all congratulate her on winning such a prestigious award. As a family business we are very pleased to work with, develop and celebrate capable young professionals such as Lauren who can evidently cut the mustard amongst the best young people in the industry.”