Not a dry eye in the house for Onion Show success 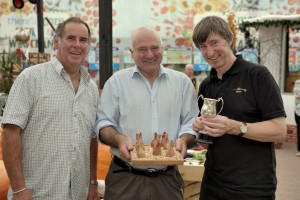 CROWDS turned out at a garden centre in Cornwall last Sunday (September 28, 2014) to see The North Cornwall Onion Show.

Trelawney@Wadebridge in Sladesbridge near Wadebridge provided the venue for the show for the fourth year running on Sunday, September 28.

Peter Burks, General Manager of the garden centre, explained: “We were delighted to be able to host the show again. It was a fantastic event and the onions on display were a great sight to see. This year the show received lots of support from the local community.

“It is thought The North Cornwall Onion Show started after World War II and has grown ever since. As it has long been established we are proud to be able to help it continue.”

There were 14 categories to enter and sections not just for onions but also other vegetables such as shallots, pickled onions, pumpkins, marrows and leeks. Each winner in each class received a cup and a cup was presented to the winner of the most classes.

Peter added: “We would like to congratulate all the winners. Charles Kestell from Wadebridge won the cup for the most classes. The heaviest onion, which weighed 7.7 pounds, belonged to Mike Blake from Tywardreath. Meanwhile Simon Stidwell from St Dominick near Callington took home a cup for his globe onions and Mihai Stefanescu from Bodmin won a cup for his black radish.

“Two families also celebrated on the day. The Matthews’ family from Bodmin won the heaviest pumpkin category. Their pumpkin weighed a staggering 213 pounds. Henry aged eight, William aged 10 and 12-year-old Evie collected their cup with their mum, Charlotte. Four-year-old Jacob Ubhi and his mum Helen from Sladesbridge won the category for the best three leeks. The vegetables on show were magnificent. Well done to everyonewho took part.”

One of Cornwall’s largest and leading independent garden centres, Trelawney@Wadebridge was originally launched in 1970 as a nursery by Frank and Marion Danning. The garden centre is now run by their son David and David Symons, who started working for the family at the age of 11.

The garden centre provides customers with a wide range of quality gardening products including plants, furniture, barbecues, gifts and food items. Its friendly and knowledgeable staff are on-hand to give visitors help and advice on all gardening matters. There is also a garden building and Elite Spa concession on-site.

Carriages Restaurant, which seats up to 240 customers, is situated next to the lake at Trelawney@Wadebridge. It serves hot and cold drinks, snacks, cakes, breakfasts, lunches, a daily carvery and children’s meals.

The award-winning, family-run business includes two generations of the Danning and Symons families. More than eight years ago the company launched a sister garden centre in North Devon, Trelawney@Ashford and is opening its third garden centre Trelawney@Probus on a green-field site in Cornwall next year (2015).

Trelawney@Probus looks set to offer visitors a chance to see plants and products in action with garden areas on-site showing how things grow and work.

For more information, please call Trelawney@Wadebridge, which is located just off the A389 in Sladesbridge near Wadebridge, on 01208 893030 or visit www.trelawney.co.uk.