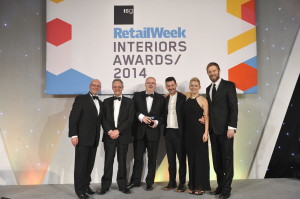 Notcutts has scooped the title of ‘Best Large Format Store’ in the annual ‘Retail Week Interior Awards’. The accolade was awarded to its new, ‘state-of-the-art’ Tunbridge Wells centre, beating large retail chains such as Next, Homebase and Primark.

The award-winning garden centre in Pembury, which re-opened in April 2014, spans across 25,000 sq ft and harnesses the natural surroundings of the site, the retailer says. Designed by London-based agency Daziel & Pow, the site places gardening and plants at the heart of the shopping experience, with an extensive planteria area that reflects the brand’s rich horticultural heritage and expertise, Notcutts believes. The site also features indoor displays, a gift shop and a 190 seat restaurant called ‘The Kitchen’, inspired by market stalls and street food, serving locally sourced produce.

Notcutts business development and retail property director Michael Cole commented: “We’re absolutely thrilled to have won this award. We were up against some tough competition from larger chain stores, so I think this is a real testament to the work we put in and the final results at the centre, which are just incredible! This award is particularly special for us because Tunbridge Wells was the first time we’d developed a new format store for a very long time and it’s the first time we’ve won, so two bonuses rolled into one!”