A commercial nursery in Hereford has collaborated with Nick Dunn of Frank Matthews of Tenbury Wells and together supplied the trees and plants for a charity garden on the outskirts of the city.

Chris Bennewith, who works at Wyevale Nurseries, assisted in the planning of the garden for Sophie House, part of the Martha Trust, which provides lifelong and respite care for young people with profound intellectual and physical disabilities.

Wyevale Nurseries sales and marketing director Adam Dunnett said: “We were delighted we could help the charity as it celebrates its 20th anniversary with the new garden at Sophie House in Hampton Bishop having previously assisted the charity at its first home, Martha House, which opened in Hampton Green in 1996.

“Within the garden there is one area which has general garden shrubs, including cytisus, hebe, forsythia and cistus. In a secondary area we built a sensory garden and planted lavenders, grasses and rosemary. The third area contains a variety of phormiums in different colours to add structure and architectural interest to the garden.” 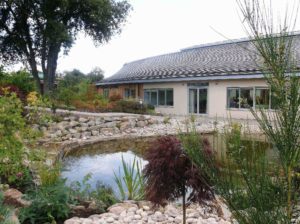 Chris worked closely with one of the founding Trustees at Martha Trust, Sarah Sharp-Smith, on the development and implementation of the garden at Sophie House, which was officially opened on Thursday, April 14. Wyevale Nurseries supplied the plants at cost price.

Sarah added: “We were delighted to have had the expert assistance of Chris at Wyevale Nurseries, who helped us to create the large landscaped gardens we have at both Martha House and Sophie House.

“The gardens, which have been designed to be fully accessible to wheelchairs, provides important elements for therapy and sensory stimulation with seating areas allowing our families to sit with their son or daughter in a peaceful environment.”

Martha Trust was founded by Richard and Sarah Smith following the birth of their daughter Sophie, who will be 28-years-old this October. The couple hope to inspire other people to create similar facilities across the country to help more families with profoundly disabled children requiring very specialised and detailed one to one care.

Martha House and Sophie House are managed on a not-for-profit basis by a Board of Trustees, which includes the Founders of the Trust.