A hospice based in Hereford has received a £697.43 donation from a local nursery after it hosted a series of fundraisers for the charity.

The funds were raised for St Michael’s Hospice in Bartestree by staff at Wyevale Nurseries throughout 2016. 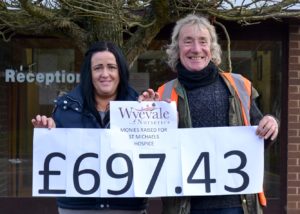 Wyevale Nurseries sales and marketing director Adam Dunnett said: “We’re delighted that we could raise £697.43 for the hospice, which is a lifeline to so many people and their families. Many of our staff members know first-hand of its vital work in the local community.

“The money came from a few fundraisers throughout 2016 including our Christmas raffle, which raised £330, £80 came from the sale of some of our wheelbarrows and our trading foreman, Geoff Godsall, grew a moustache for a month and managed to collect £287.43. We would like to thank everyone who made a donation.

“We have decided that we will continue to support St Michael’s Hospice throughout the coming year as it will be our chairman’s charity for 2017. We hope to raise even more for the organisation in 2017.”

St Michael’s Hospice looks after people age of 18 and above with progressive life-limiting illnesses at various stages of their journey. It also provides care and support for patients’ families, friends and carers.

St Michael’s Hospice director of income and marketing Ruth Denison added: “We would like to say a huge ‘thank you’ to Wyevale Nurseries for their support throughout 2016 and are so pleased it has decided to continue its relationship with us in to 2017. The money will help St Michael’s Hospice continue to provide its care free of charge to patients, their families and carers.”