Staff at Herefordshire-based Wyevale Nurseries will this month be at Hellens Garden Festival in the county to host a talk and run a plant stall in aid of charity.

Members of the team at Wyevale Nurseries have organised the plant stall at Hellens Manor in Much Marcle on June 10 and 11, with the proceeds being donated to St Michael’s Hospice and Eastnor Primary School. 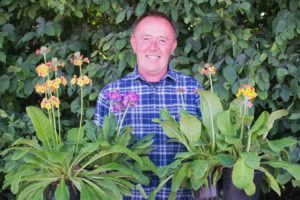 Wyevale Nurseries garden design and domestic landscape sales manager Adrian Hoare said: “We’re delighted to announce that we are sponsoring the Hellens Garden Festival. As well as the plant stall, Kyle Ross, our management trainee, is also attending the festival to give a talk on five common pests and diseases which affect plant health, followed by a question and answer session.

“During the two-day festival, there will be lots of talks, seminars and interactive workshops and demonstrations. One of the key note speakers will be Sir Roy Strong, sharing his creative journey during the past 30 years of his award-winning Laskett Gardens.

“We hope our plant stall in aid of St Michael’s Hospice and Eastnor Primary School is a success. We will be selling a range of seasonally interesting herbaceous plants and shrubs.”

St Michael’s Hospice in Hereford looks after people aged 18 and above with progressive life-limiting illnesses at various stages of their journey. It also provides care and support for patients’ families, friends and carers.

This is the eleventh consecutive year the festival has been held and the theme this year being ‘Growing Today for All Our Tomorrows’. Herefordshire Wildlife Trust will be bringing its family-friendly activities and marquee, the Hive.

There will also be specialist exhibitors such as hand weavers, hurdlers and coppicing, pole lathe work and clay modellers. The festival will also be showcasing young people who have chosen careers in blacksmithing, metal work, carpentry and joinery.

Following the success of its interactive workshops in 2016, visitors will be invited to attend and be part of innovative and informative workshops. There will specialists including foragers and herbalists, master composters and chicken keepers, expert plants people and sour dough cookers, all on hand to share their knowledge.

Hellens Garden Festival will take place on Saturday, June 10 and Sunday, June 11 from 10am until 5pm.