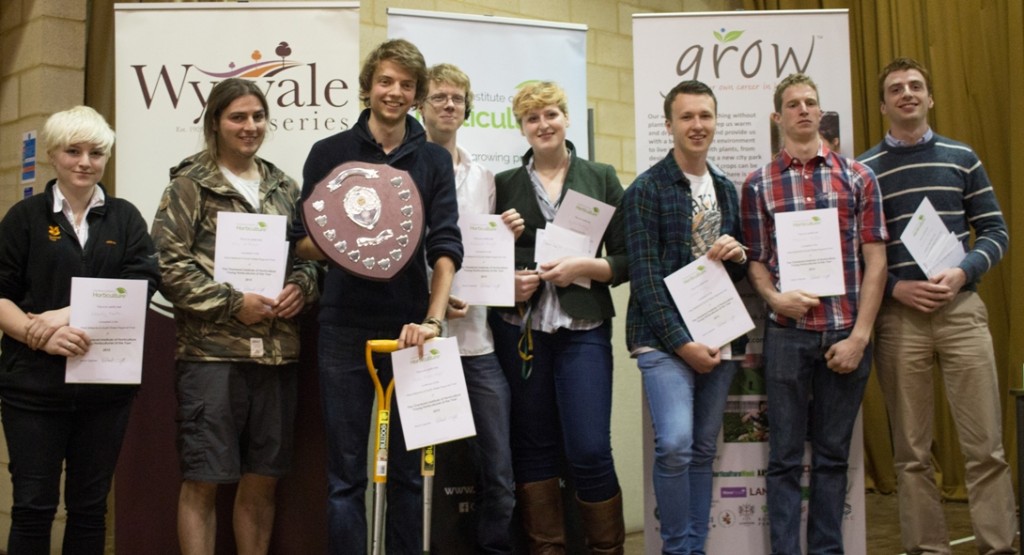 ONE OF the UK’s leading nurseries has this month (April, 2015) donated prizes to some of the regional finalists in the Institute of Horticulture’s Young Horticulturalist of the Year competition.

Adam Dunnett, Sales and Marketing Director at Wyevale Nurseries, which is based in Hereford, explained: “We’re delighted we could support the competition and donate and present prizes to the top three finalists in the West Midlands and South Wales region.

“During the regional competition a Question Master asked a wide range of horticultural questions, some on a buzzer and some directed to individual contestants, with two identification rounds to further test the contestants’ depth and breadth of knowledge.

“The overall winner was Josh Egan-Wyer. He will now proceed to the grand final of the competition. We would like to say a huge congratulations to Josh.

“The Young Horticulturalist of the Year is an annual competition organised by the Chartered Institute of Horticulture, the only professional body representing all aspects of horticulture.

“The Institute founded the Young Horticulturist of the Year competition shortly after it was established as a way of encouraging and rewarding excellence among those starting out in a career in horticulture and today nearly 2,000 young people under the age of 30 participate each year.”

The winner of the grand final receives the £2,000 Percy Thrower Travel Bursary, provided by the Shropshire Horticultural Society. This funds a horticultural tour anywhere in the world. Previous winners have visited Borneo, China, New Zealand, South Africa, the Himalayas, the Galapagos Islands, the United States, South America and Europe.

Josh, who is 23-year-old and lives in Pershore, said: “I am overwhelmed to have won the regional heat and can’t wait for the grand final. I would like to thank Wyevale Nurseries for the vouchers.

“I started my horticultural career in 2009, working in a local garden centre where I got the taste for commercial horticulture. Having been a keen young gardener before, I knew that horticulture was the career for me and so I enrolled on the BSc Horticulture programme at Pershore College. I spent three years training in a wide range of horticultural disciplines as well as undertaking a number of extra-curricular activities.

“During my 2nd year I proposed a new plant identification/database system at the college and worked with the Enterprise Board at the College to develop a QR code based plant labelling and database system. This included mapping the whole college and its planted borders so we could pinpoint plants around the campus.

“During my three years there, I also gained valuable work experience in the wholesale nursery and grounds department. Upon leaving, I managed to score the Nursery Manager’s job at Pershore College. I am now responsible for the day to day running operations, purchasing, sales and production related activities for the nursery. I also administer the College’s two Plant Heritage National Plant Collections (Penstemon pre. 1995 cvs and Philadelphus cvs.).

“I also sit on the Worcestershire Plant Heritage group committee and I am vice-chair for the West Midlands and South Wales branch of the Chartered Institute of Horticulture. Fingers crossed all the information I have learnt over the years will help me in the grand final.”